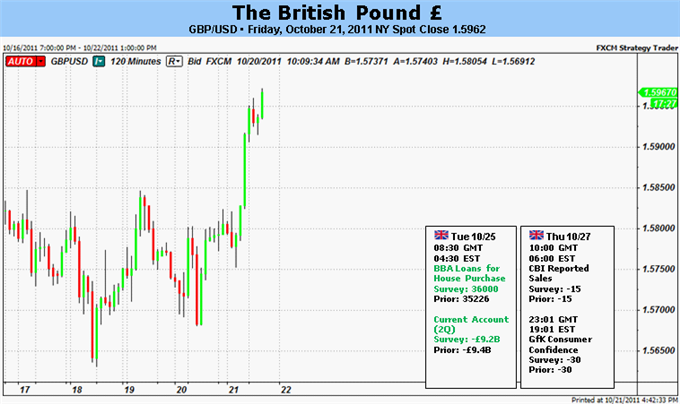 Finding itself anchored to risk sentiment trends along with most major currencies, the British Pound looks in anticipation to the outcome of the weekend’s EU debt crisis summit to define price action for the week ahead. Optimism was running high into Friday’s weekly trading close, with Sterling soaring along with the spectrum of risky assets, as investors prepared for policymakers to announce concrete measures to prevent the festering malaise in Greece from infecting the currency bloc and establish a bulwark against future crises. If these rosy expectations are validated, the Pound is likely to remain well-supported. Naturally, the opposite is likewise the case if EU lawmakers deliver a plan that falls short of assuaging market jitters.

On balance, the broad outline of what is needed from EU officials is well-established at this point: acknowledgement that Greece is bust, followed by a partial default and restructuring; a plan to recapitalize banks that take heavy losses on their holdings of Greek debt; and a tangible commitment to ensure other EU members will not be allowed to fail to prevent contagion. Needless to say, steps 2 and 3 are proving most difficult, with funding the key sticking point. Policymakers need to come up with sufficient funding to assure banks are kept liquid while still having enough cash on hand to credibly claim a meltdown in larger Euro Zone countries like Italy and Spain will be prevented.

Some encouraging news has emerged. France backing away from a scheme to give the EFSF bailout fund a banking license, thereby allowing it to borrow from the ECB, a proposal strongly opposed by Germany and fueling discord among the key decision-making countries in the Euro Zone. Meanwhile, some reports have suggested increasing immediately available firepower by combining the existing EFSF with the more permanent ESM (European Stability Mechanism) set to take effect in 2013, although a considerable portion of countries’ commitments remains unfunded and unclear whether the markets will be mollified by another EU promise without hard upfront cash to back it up.

The UK economic calendar is largely empty, with only a handful of second-tier releases set to cross the wires. Meanwhile, the EU’s decision to extend negotiations past the original October 23 deadline through October 26 will mean that the drama in Brussels will preoccupy the markets for some time, with plenty of knee-jerk volatility ahead as the Pound jumps from headline to headline along with sentiment at large. - IS