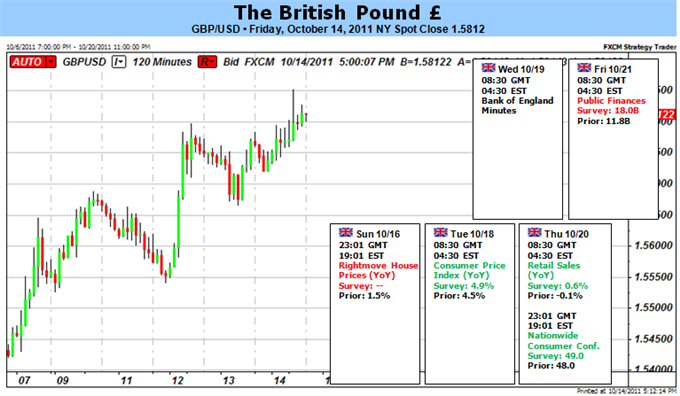 The British pound advanced by more than 1.6% this week as a broad based rally in risk appetite saw traders aggressively turn on the greenback with risk assets surging throughout the week. Optimism that European Leaders will be able to stem the threat of contagion and hopes for a more concrete solution from the G20 meeting this weekend has kept market sentiment well supported. However the sharp run-up in equity markets may be short lived if the Europeans are unable to ease concerns over the ongoing debt crisis and with banks now voicing disapproval for the call for recapitalization, sentiment could quickly shift with the greenback likely to be the primary beneficiary of haven flows.

The UK economic docket next week presents a significant amount of event risk for the sterling with inflation data and the Bank of England minutes highlighting the calendar. Minutes from the October 6th BoE policy meeting will be closely eyed by investors on Wednesday. The central bank held rates at 0.50% last week citing that, “the pace of global expansion has slackened,” with the, “indebtedness of some euro-area sovereigns and banks has resulted in severe strains in bank funding markets and financial markets more generally.” Traders will be eyeing the minutes for the vote count to assess whether there was consensus among members of the Monetary Policy Committee. If the vote was unanimous, it may suggest that officials are becoming increasingly concerned about the slowing pace of the recovery, and may look to further expand QE measures beyond its planned £275 billion bond purchase program. The central bank expanded its purchase program from £200 billion last week as fears of undershooting the 2% inflation target continue to take root, with members, “judging that is was necessary to inject further monetary stimulus measures into the economy.”

CPI data on Thursday is expected to show further increases in prices for the month of September with consensus estimates calling for a print of 4.9% y/y, up from a previous read of 4.5% y/y. If the data prints at expectations, it would mark the highest pace of inflation since September of 2008. In the central bank’s policy statement, the BoE noted that although inflation may peak above 5% in the coming months, “the deterioration in the outlook has made it more likely that inflation will undershoot the 2% target in the medium term.” Although the injection of further stimulus into the economy will likely weigh on the pound in the interim, it may turn out to be the best course of action as the central bank sees slowing growth prospects and diminishing temporary factors likely to cause inflation to come off substantially in the months ahead. Despite much criticism by government officials, the data may show that Governor Mervin King made the right decision in holding interest rates despite the recent run-up in CPI data.

The GBP/USD pair closed the week just above the 61.8% Fibonacci extension taken from the October 6th and 11th troughs at the 1.58-handle. Interim support holds here with subsequent floors seen at the 50% extension at 1.5750 and 1.5680. Topside resistance is eyed at 1.5850 backed by the 1.59-figure and the 100% Fib extension at 1.5960. Looking ahead, the pound will be vulnerable ahead of the BoE minutes on Wednesday, with a call for further easing measures likely to see the pound pare some of the gains made this week. -MB