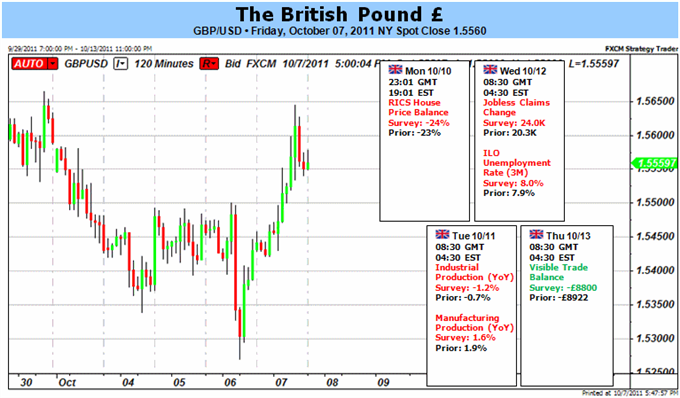 British Pound Rebound To Taper Off As U.K. Growth Falters

The British Pound regained its footing to reach a fresh monthly high of 1.5645, but the sterling may struggle to hold its ground over the following week as the economic docket is expected to instill a weakened outlook for the U.K. Indeed, the GBP/USD pared the decline following the Bank of England interest rate decision, with the exchange rate bouncing back from 1.5273, but the rebound is likely to be short-lived as market participants speculate the central bank to expand monetary policy further over the coming months.

The economic developments on tap for the following week are expected to show U.K. jobless claims increasing another 24.0K in September, while industrial outputs are expected to contract 0.2 percent for the second consecutive month in August. The slowing recovery in Britain continues to cast bearish outlook for the sterling, and the BoE may carry its easing cycle into the following year as policy makers see an increased risk of undershooting the 2 percent target for inflation. As the Monetary Policy Committee keeps the Asset Purchase Facility ‘under review,’ the heightening risk of a double-dip recession may push the central bank to expand its nonstandard measure beyond the GBP 275B target, and Governor Mervyn King may continue to talk up speculation for additional quantitative easing as policy makers maintain a cautious outlook for the region. However, the preemptive approach to shield the U.K. economy may lead the committee to adopt a wait-and-see approach for the remainder of the year, and we may see the sterling consolidate ahead of the BoE meeting minutes due out on October 19 as market participants weigh the outlook for monetary policy.

As the GBP/USD struggles to push back above the 38.2 percent Fibonacci retracement from the 2009 low to high around 1.5680-1.5700, it looks as though we will see a short-term correction unfold in the days ahead, and the exchange rate may fall back towards the 50.0 percent Fib around 1.5250 to test for support. In turn, the GBP/USD may face range-bound price action over the following week, but the BoE minutes could eventually spark another selloff in the exchange rate as the central bank curbs its outlook for growth and inflation. – DS