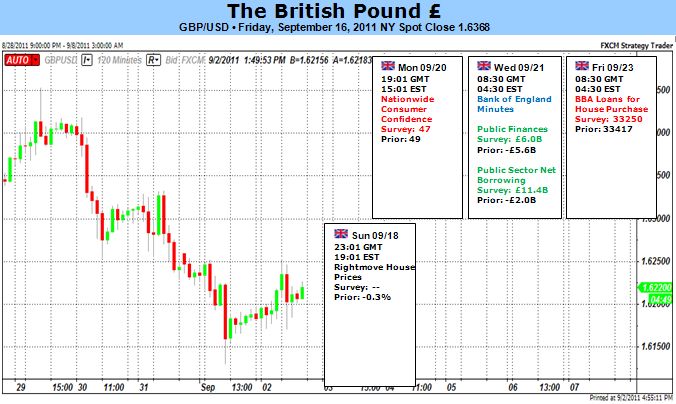 The British Pound had a rough week, falling across the board against all of the major currencies, save the Australian Dollar. The Sterling was weakest against the Canadian Dollar and the Euro in particular, while falling just over half of one percent against the U.S. Dollar. Data out of the United Kingdom was not supportive of a stronger Sterling either. The RICS house price balance report, a measure of the health of the British housing sector, fell by 23 percent in August. The consumer price index came in at the forecasted figure, at 4.5 percent year-over-year in August, though as noted in the Bank of England quarterly inflation report, price pressures are expected to subside in the coming months. While the 4.5 percent reading would normally dictate strong hawkish policy response, markets have priced in the fact that the Bank of England has signaled that it will leave rates on hold at 0.50 percent for an extended period.

The coming week offers little support for the Pound on a fundamental basis. Another gauge of the British housing sector is due on Sunday, this time in the form of the Rightmove house prices survey. Although there is no forecasted figure, house prices have already contracted two consecutive months, on a monthly basis, and this week’s housing data points towards further contractions. On Tuesday, an index of consumer confidence will be released. The Nationwide sentiment report, which measures the population’s view of the current position of, and future prospects for, the British economy, is expected to have fallen back to 47 in August from 49 in July. Such a reading would be the second consecutive reading below 50, and the fifth reading below 50 thus far in 2011.

The most important print of the week, however, comes out on Wednesday, when the minutes of the Bank of England’s Monetary Policy Committee September 8 meeting are released. At the last policy meeting, the Bank of England voted to maintain the key interest rate at 0.5 percent, while maintaining the target of its bond program at £200 billion, despite calls to expand asset purchases. Despite the high rate of inflation, more than double target rate of 2 percent at 4.5 percent, policymakers agree that the economy remains too weak to withstand higher interest rates.

With economic recovery expected to be shaky in the short- and medium-term, the Monetary Policy Committee will likely hold the bank rate at 0.5 percent through the end of 2011.The notion of keeping interest rates low despite swelling price pressures is not unique to the Bank of England, as the European Central Bank as well as the Federal Reserve have embarked on similar policies recently. The key information from the minutes will be the Bank of England’s decision in regards to expanding its asset purchase program: although no expansion of the program was signaled at the recent meeting, dissenting votes would suggest this position could shift soon. –CV