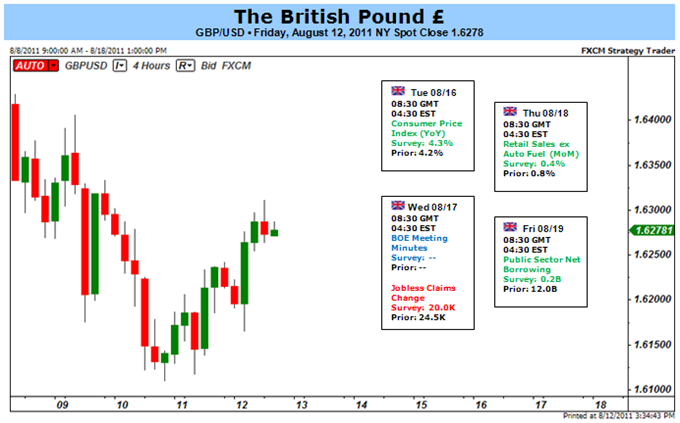 The British Pound finished the week mostly lower, falling 0.71 percent on the week against the major currencies. The losses are increased, however, when considering removing the Swiss Franc from the equation: the Sterling was down 1.22 percent overall. Data released this week certainly didn’t aid the Sterling’s cause, with disappointing figures released regularly over the course of the week. Industrial production and trade balance data on Tuesday severely missed expectations to the downside, while the Bank of England’s inflation report further underscored the central bank’s loose monetary policy, likely to remain in place for some time now – a stance that could weigh on the British Pound as interest rate differentials widen with other developed economies.

In terms of data due out for the coming week, there are two notable releases on the horizon that are likely to stir the Pound, especially considering the GBP/USD had significantly lower volatility than other major currency pairs, such as the USD/CHF or USD/JPY. On Tuesday, the historically market moving consumer price index report will be released, though its effect on markets might be limited this month, as it comes after the quarterly Bank of England inflation report. However, a significant miss on the data would stoke immense price action, so it remains worth mentioning.

Inflationary pressures continue to be a burden for the British economy, despite a decrease in the inflation data released for June from 4.5 percent to 4.2 percent. According to a Bloomberg News survey, economists forecast the inflation indicator to rise back to 4.4 percent for July. This is disconcerting news for the country, as growth figures released in July revealed that the economy grew slower-than-expected on a year-over-year basis. Generally speaking, interest rates are increased to contain inflationary pressures, but with the Bank’s primary focus of stimulating economic growth, rates are expected to remain at very low levels for an extended period, a view that will be confirmed upon the release of the Bank of England meeting minutes from August 4.

On August 4, the Bank of England voted to maintain the key interest rate at 0.5 percent. Despite the current high clip of inflation – more than double the central bank’s 2.0 percent mandate – policymakers at the Bank of England agree that the economic outlook is not stable enough to withstand higher interest rates. It is evident that the Bank of England’s Monetary Policy Committee is focused on economic growth rather than reducing inflation. With economic recovery expected to be shaky in the short and medium term, the Monetary Policy Committee will likely hold the bank rate at 0.5 percent through mid-2012. Such a dovish outlook could weigh on the Sterling in the near future, especially if risk-appetite finds revival. –CV