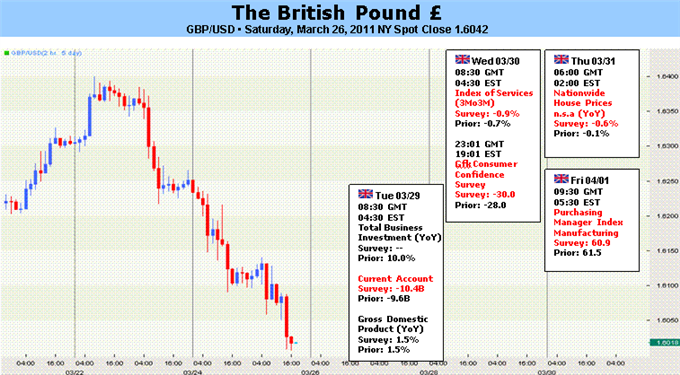 Interest rate hike expectations remain the central driver behind British Pound price action. Indeed, as much is evident in the steadily strong correlation between GBPUSD and the UK-US December 2011 interest rate futures spread, a reflection of traders’ outlook on where relative borrowing costs will be by the end of the year. This appears to open the door for a move lower as last week’s disappointing news-flow continues to filter into the exchange rate with close to no offsetting factors on the upcoming calendar. With that in mind, renewed sovereign stress on the Euro Zone periphery in the aftermath of the March 24-25 EU summit may underpin demand for sterling as a regional alternative amid an exodus from the single currency.

Minutes from the March meeting of the Bank of England’s rate-setting MPC committee revealed no added sense of urgency despite the steadily climbing inflation rate, which hit a 28-month high in February. The rhetoric sounded familiar, with policymakers arguing that the current upswing was temporary and would subside as the effects of the increase in VAT – a consumption tax – and that of higher oil prices filter out of year-on-year figures. This week’s economic and speaking calendars will do little to counter fading rate hike bets, with a revised fourth-quarter GDP reading amounting to the only bit of top-tier data while MPC members David Miles and Paul Fisher – both firm doves that are unlikely candidates to be lured over to the hawkish camp – take to the wires.

While the above environment is seemingly ripe for Sterling losses, renewed escalation in Euro Zone sovereign risk could underpin the UK unit as an alternative regional unit of exchange in the event that confidence in the Euro begins to crumble. Such a scenario seems reasonable after the EU leaders’ summit that concluded in Brussels on Friday failed to address any of the pressing issues facing debt-strapped periphery member states, opting to flesh out the bailout mechanism that would kick in after 2013 when the current temporary setup expires. Meanwhile, the discussion of expanding the current rescue fund (the EFSF) has been put off despite rising stress in Spain and Portugal. Between those two, the latter is small can probably find a lifeline in the EFSF as-is, but the latter is the fourth-largest economy in the Euro Zone whose bailout would be far costlier. If fears of a genuine flare-up in Spain begin to bubbled to the surface after Moody’s downgraded 30 of the country’s banks last week and with a major debt rollover of €7.3 billion just around the corner, the Euro’s pain may translate into British Pound strength.