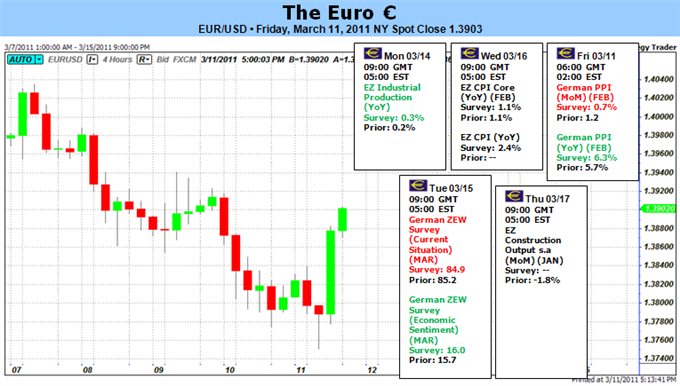 Last week’s Bank of England rate decision proved to be another non-event, with traders now turning their attention to risk appetite until minutes from the sit-down are released in two weeks, offer a reading on the central bank’s evolving hawkish bias. Indeed, the correlation between GBPUSD and the UK-US 2-year yield spread (a gauge of relative monetary policy expectations) has dropped to the lowest in three months. Meanwhile, the correlation between the pair and the MSCI World Stock Index – a proxy for broad trend in sentiment – has strengthened dramatically through the first two weeks of March. Looking ahead, this hints the path of least resistance leads lower as a confluence of headwinds bears down on the spectrum of risk-sensitive assets.

The bears have their pick of reasons to push prices lower. Turmoil in the Middle East and North Africa continues, with Libya now engulfed in all-out civil war and protests heating up in Yemen, Bahrain and – perhaps most dangerously with regard to oil prices – Saudi Arabia. Further, signs of material economic slowdown are becoming increasingly apparent in China following a dismal trade balance report. Finally, the end-game to the Euro Zone debt crisis appears to have been fumbled even before the crucial March 25 sit-down of the region’s leaders as a preliminary summit on Friday yielded an agreement conspicuously heavy on rhetoric but short on substance, opening the door for sovereign default fears to swell anew. Policymakers announced changes that were largely ceremonial: the European Financial Stability Facility (EFSF) will now be able to access its full capital base of 440 billion euros, and set “goals” rather than binding targets on budget rules for member states. These are half-measures at best: the bailout fund is still woefully inadequate to deal with the rescue of a larger state like Spain, and Euro Area members’ past record on adherence to the Stability and Growth Pact (which outlines budget deficit limits) suggests the new benchmarks will not amount to much in practice.

Turning to the economic calendar, February’s Jobless Claims figures amount to the only bit of top-tier event risk on the docket. Expectations are calling for benefits applications to rise 1,300 from the previous month while the Claimant Count – a proxy for the jobless rate – holds steady at 4.5 percent. On balance, the report falls well within the range of outcomes recorded since July, pointing to relatively stable labor-market conditions. To that affect, the figures are unlikely to meaningfully dislodge investors’ priced-in view of the UK economy and so will probably yield a muted reaction at best from price action.