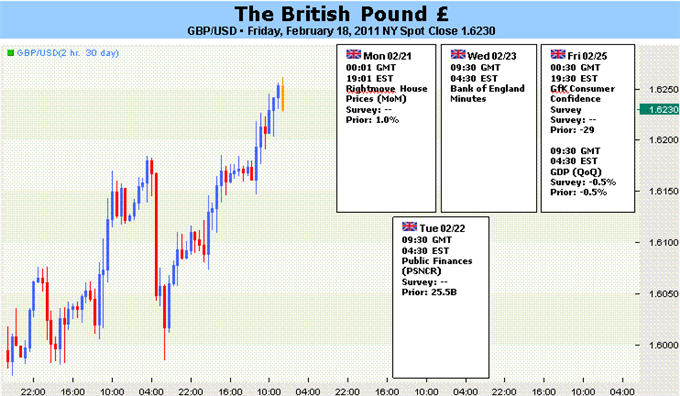 British Pound to Pull Back as Rate Hike Bets Moderate

Monetary policy expectations are firmly in focus for the British Pound, with the correlation between GBPUSD and the UK-US 2-year Treasury yield spread at the highest in six months on 20-day percent change studies. This turns the spotlight on the Bank of England as policymakers release minutes from February’s meeting of the rate-setting MPC. While Sterling’s performance was second only to the Franc last week as the aforementioned yield spread moved 5.8bps in its favor, risks for the week ahead appear skewed to the downside with near-term rate hike expectations looking increasingly like wishful thinking.

Last week, rate hike bets were kept alive as BOE policymaker Andrew Sentence delivered a blisteringly hawkish speech on Thursday, saying the central bank’s inflation forecast was “too optimistic” and encouraging a rate hike to – among other things – strengthen the Pound as an additional bulwark against price growth. While such fighting words are certainly music to the ears of GBP bulls, they are also nothing new: Mr Sentence has been the lone hawk on the MPC for a long time, and this kind of rhetoric is surely to be expected. Although Martin Weale joined Sentence in the call for a rate increase in December, the two represent just two members of a nine-strong committee and would need to convince at least three others to back their position, an outcome that looks decidedly unlikely over the near term.

Meanwhile, last week’s publication of the BOE’s Quarterly Inflation Report revealed a central bank that was far less hawkish than Mr Sentence or market rate hike bets would suggest. Policymakers acknowledged that inflation had accelerated faster than they had predicted and openly projected more of the same through the first half of this year, but still maintained that higher prices owed to “temporary” factors including a value-tax increase as well as higher energy and import costs. This was followed by the now-familiar promise that inflation would moderate as these temporary forces fade. Perhaps most interestingly, the BOE said that this moderation assumed the “Bank Rate moves in line with market interest rates,” which according to the report amounted to 50bps in rate hikes this year. This apparent validation of benchmark rates at 1 percent by the end of 2011 stands in stark contrast to where market expectations sit today, envisioning a BOE that is substantially more aggressive.

On balance, the meeting minutes release is likely to broadly mirror the inflation report considering the latter served as the primary basis for February’s policy decision, with the greatest risk being that Martin Weale backtracked on his support for a rate hike in light of the fourth-quarter GDP drop (the broad-based nature of which will be expanded upon in a revised release later in the week). Even if this doesn’t materialized however, another restatement of the bank’s baseline scenario is likely to underscore the disconnect between its thinking and the markets’, opening the door for correction lower both in tightening expectations and the Pound.