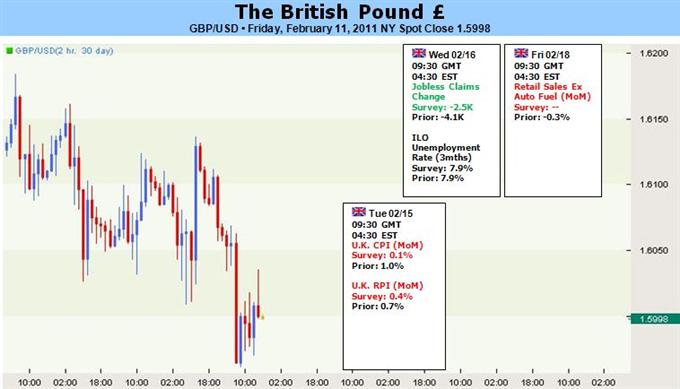 British Pound Weakness To Be Short-Lived on Higher Growth, Inflation

British Pound Weakness To Be Short-Lived on HigherGrowth, Inflation

The British Pound broke out of the upward trend from the previous month, with the GBP/USD slipping below 1.6000 for the first time since January, but we may see a reversal in the exchange rate next week as the economic docket is expected to reinforce an improved outlook for growth and inflation. At the same time, the Bank of England is widely expected to hold a hawkish tone in its quarterly inflation report as price growth continues to hold above the governments 3 percent limit, and comments from the central bank could instill a bullish outlook for the sterling as market participants speculate the MPC to gradually normalize monetary policy later this year.

The headline reading for U.K. inflation is expected to increase to an annualized pace of 4.0% in January, which would be the fastest pace of price growth since November 2008, while the core CPI is forecasted to reach a record-high of 3.1% during the same period. At the same time, claims for unemployment benefits are projected to contract another 3.0K after slipping 4.1K in December, while retail sales excluding auto fuel is anticipated to increase 0.2% during the first month of 2011. As growth and inflation accelerates, the BoE may show a greater willingness to withdraw monetary support over the coming months, and hawkish comments from the central bank should produce a bullish reaction for the British Pound as investors speculate the MPC to lift the benchmark interest rate off the record-low later this year. According to Credit Suisse overnight index swaps, investors anticipate the central bank to increase the key rate by at least 75bp over the next 12 months, and interest rate expectations may gather pace as policy makers expect price growth to remain elevated this year.

In turn, the recent weakness in the British Pound is likely to be short-lived and the exchange rate may make another run at 1.6300 as the economic recovery in the U.K. gathers pace. However, as the near-term rally in the GBP/USD fails to produce a test of the November high (1.6298), the pound-dollar appears to have carved out a double-top in February, and we will certainly need to see a slew of positive developments come out of the U.K. to generate a rebound in the exchange rate. - DS