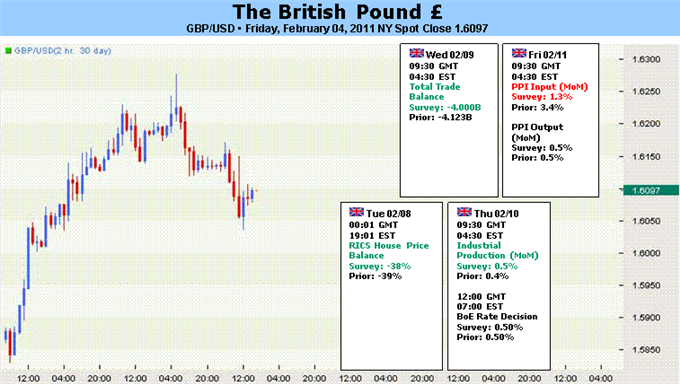 Monetary policy is firmly in focus in the week ahead as the Bank of England delivers February’s much-anticipated interest rate decision. The announcement takes on special significance considering it will coincide with the creation of an updated quarterly inflation forecast, promising to bring some much-needed clarity to the ongoing debate about how policymakers plan to reconcile stubbornly high inflation with already sagging growth that is facing additional headwinds as the impact of the government’s austerity program continue to filter into the overall economy.

For their part, traders appear to be increasingly positioned for a hawkish outcome. Indeed, a Credit Suisse gauge of priced-in rate hike expectations over the coming year stands at the highest in a year. This seems reasonable. While GDP growth certainly disappointed on a quarterly basis in the three months through December, overall growth in 2010 outdid the central bank’s forecast calling for a 1.17 percent annual increase, adding 1.6 percent. Meanwhile, inflation stands at an eight-month high, challenging the central bank’s credibility as a bulwark of price stability considering Mervyn King and company spent most of last year promising that CPI would retreat on its own only to see it continue to march upward. Minutes from January’s BOE sit-down reinforced signs the likelihood that policymakers would err on the side of price stability, opting to handle the threat of a back-slide into recession when and if it materializes. On balance, this opens the door for a move higher for the British Pound.

The outlook for interest rates will not be uncontested as the top driver of Sterling price action however, with GBPUSD showing a firmly re-established correlation with trends in underlying risk appetite (as tracked by the MSCI World Stock Index). This seemingly points to weakness for the UK unit as traders digest the details of the US employment report released on Friday. Shares finished higher on Wall Street as investors opted to focus on the drop in the unemployment rate rather than the underwhelming increase in payrolls, but this may quickly dissipate as it becomes apparent that the decline owed to an exodus of discouraged workers from the labor force rather than any kind of improvement. Indeed, the labor force participation rate dropped to the lowest since March 1984. If the lackluster outcome for the world’s top economy – long the bellwether for global growth at large – rekindles risk aversion in earnest, GBPUSD may find itself facing acute selling pressure regardless of how the BOE opts to proceed.