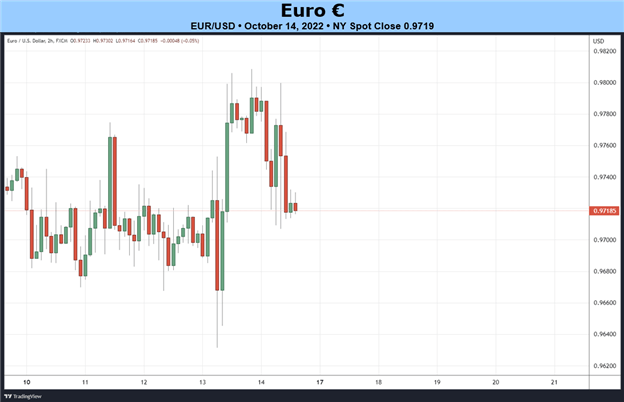 The Euro produced mixed results as the calendar turned through the middle of October. EUR/USD rates were relatively tame, closing lower by -0.22%. The big movers were EUR/JPY and EUR/GBP rates, thanks to another sharp leg lower in the Japanese Yen and some tentative relief around the UK fiscal situation following the resignation of UK Chancellor of the Exchequer Kwasi Kwarteng: the former gained +2.11%; and the latter lost -0.97%.

The European economic calendar is fairly light in the week ahead, and the real fireworks will arrive later this month when the European Central Bank meets for its October rate decision. Nevertheless, there is at least one data release on the calendar that should spark traders’ interest in the coming days, given the impact it could have on the October ECB meeting.

ECB policymakers may not be dealing with dysfunctional bond markets to the degree that the Bank of England has been recently, but like the BOE, they are attempting to raise interest rates to curtail multi-decade highs in inflation rates ahead of a recession in the Eurozone.As recession fears mount, however, the runway that the ECB has to try to raise rates is starting to shrink, leaving policymakers with a stagflation quandary: raise rates to try and lower price pressures at the risk of a more severe economic contraction; or halt rate hikes, running the risk of persistently higher inflation, in order to prevent a sharp recession. 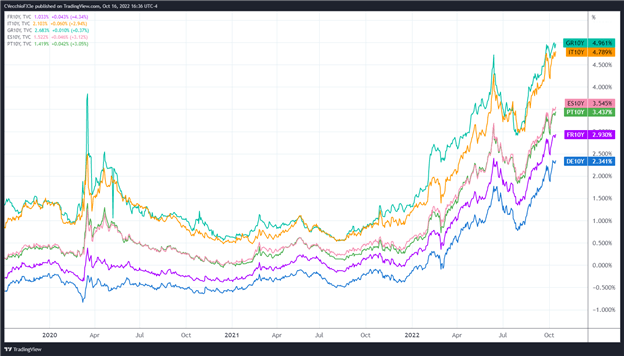 Persistently high inflation rates across developed economies, aggressive tightening efforts by major central banks, and now bedlam in UK Gilt markets have spilled over to European bond yields. Across the Eurozone, sovereign debt has come under pressure, reaching their lowest prices/highest yields in several years. For the time being, global market participants are acting unconcerned by the development – the murmurs of a resurrected Eurozone debt crisis have died down – but further weakness in periphery debt, mainly Greece and Italy, could soon become more problematic for the Euro. 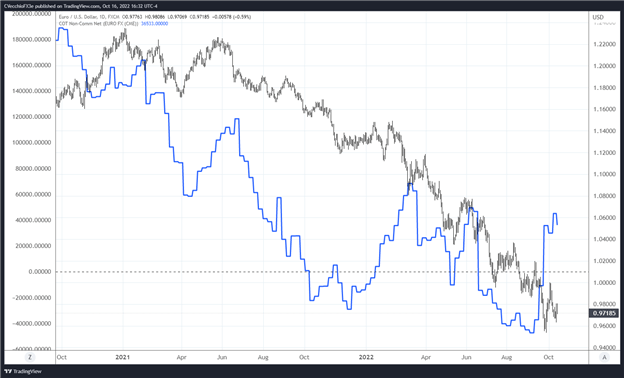 Finally, looking at positioning, according to the CFTC’s COT for the week ended October 11, speculators decreased their net-long Euro positions to 36,533 contracts from 45,068 contracts. Euro positioning is coming off of its most net-long level since the middle of June.