On Friday, representatives of the EU member states met to discuss potential solutions to the energy crisis that Europeans face ahead of the winter season. Most of the proposals were well received except for a price cap on Russian gas as a number of countries still rely on gas from Russia and are still receiving flows despite Nord Stream being turned off indefinitely.

The draft summary largely consisted of the following points and are set to be formally proposed by the EU’s executive arm next week:

Refine Your Fundamental View of Markets

The ECB hiked by 75 basis points, which seems like a massive statement of intent, but was more or less priced in before the meeting. ECB President Christine Lagarde went to great lengths to stress that the committee unanimously decided on 75 bps hike and that more hikes will be coming. In fact, she mentioned that we are likely to see two more hikes but no more than five but that remains data dependent.

Since markets had already priced in the rate hike, more was needed to boost the euro. Also, while the ECB hikes in once sense (rates), it continues with asset purchases which is a stimulatory activity. This could change in the coming week at an article from the Financial Times titled, “ECB to start talks on shrinking its balance sheet” could signal doubling down of ECB members on contractionary monetary policy, which in turn, may provide some support for the beleaguered euro. 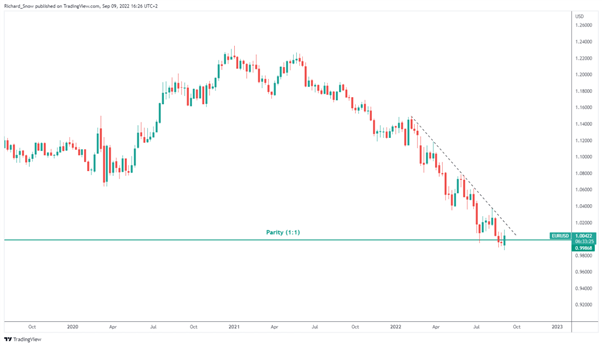 The euro continues to battle headwinds that are fairly longer-term in nature (energy crisis, economic slowdown and worsening balance of trade). Even when factoring in the relatively massive interest rate hike, a fairly large rate differential still exists between other major central banks with the exception of the Bank of Japan.

In essence, there is very little going for the euro at the moment meaning that the outlook of selling into (euro) strength remains constructive until we see a massive change in underlying fundamentals. The EU, much like the UK government, is however planning on shielding consumers from massive energy costs which would provide support for household incomes and assist the local economy.

Economic Calendar for the Week Ahead

The economic calendar kicks off on Tuesday with German inflation data which saw a higher print in August of 7.9%. inflation data for June and July (7.6% and 7.5%) were both cooler than the May print which was the first time Europe’s largest economy reachedthe 7.9% figure this year.

Also on Tuesday we see ZEW economic sentiment for both the eurozone and Germanywith both figures printing new lows for the year in August. Then on Thursday we have eurozone balance of trade data which has turned negative since November 2021, although we have been seeing improved data since May.

Lastly, on Friday we have the final version of HICP(inflation) data out for the eurozonewhere it is expected that we'll see a confirmation of the earlier flash estimate of 9.1%.