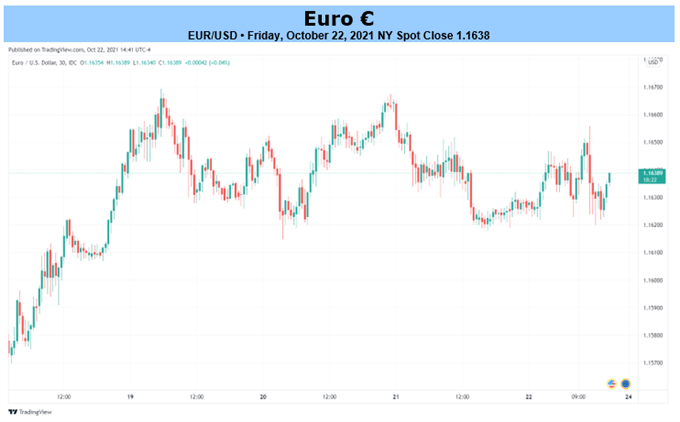 The last few sessions have been better for the Euro, with EUR/USD recovering gently some of its recent losses, but a sustained rally from here remains unlikely. As has been the case for some time now, the European Central Bank, along with the Bank of Japan and the Swiss National Bank, has been right at the back of the queue of central banks intending to increase interest rates.

That will continue to hold back the Euro, even though recent research has suggested that EUR/USD is one of the currency pairs most sensitive to changes in “risk on, risk off” sentiment in the markets and that interest rate expectations are therefore less of an influence on EUR/USD than on some other currency pairs.

Still, the meeting of the ECB’s policy-setting Governing Council will be the focus of attention for Euro traders this week, even though it will end with Eurozone interest rates and all the bank’s various bond-buying programs left unchanged and, the ECB hopes, EUR/USD unchanged too.

One problem for the ECB is that its rate setters appear deeply divided. Their standard line is that the current spike in Eurozone inflation will be temporary and that the growth in consumer prices will ease next year as the effects of the post-pandemic bounce in the economy wear off. However, there the agreement ends.

Just last week, for example, Reuters reported that the ECB’s “two leading economic thinkers” had “sparred” over how likely it was that the recent sharp rise in Eurozone inflation would become permanent. Chief Economist Philip Lane, a dove, argued that forces could drag down price growth whereas his colleague Isabel Schnabel, a hawk, warned of more persistent inflationary pressures. The doves are certainly in the ascendancy for now, with chief hawk Jens Weidmann, the Bundesbank President, stepping down.

However, there is no need for any of this to surface at this week’s meeting, which is really just a prelude to the next meeting on December 15/16, when new staff economic projections will be available. The ECB will therefore be hoping that this week will be as uneventful as possible, with a negligible impact on the markets.

At present, the consensus is that the ECB will start to wind down its asset purchases next year, perhaps in March, and begin to increase interest rates in 2023, well after the Bank of England and the US Federal Reserve. As that would make it one of the last to raise rates, the scope for a sustained Euro rally is very limited – although an important factor yet to be decided is just how much debt it will continue buying after a decision has been made to slow its purchases.

Eurozone Inflation and GDP Data Due

Against this background, preliminary October inflation figures for the Eurozone and its major countries due Thursday and Friday could be crucially important, and rather more so than the first looks at third-quarter GDP growth. Remarkably, the German consumer price data are actually released in the gap between the ECB’s policy statement and President Christine Lagarde’s news conference, so European traders would be wise to skip lunch that day.