EUR/USD Forecast: What’s the Incentive to Buy the Euro? 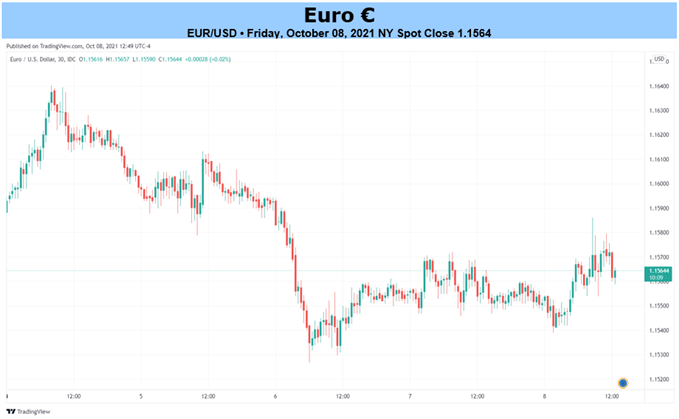 EUR/USD has been falling steeply for the past month now, dropping from a recent high just above 1.19 on September 3 to its current levels around 1.1550. Indeed, at one stage last week the pair reached its weakest point since July 2020.

Against this background, it could be seen as “cheap” enough to attract some dip-buyers and bottom-fishers, but where is the catalyst for a change in direction? The problem for Euro devotees is that the European Central Bank remains near the back of the queue of central banks thinking of tapering their monetary stimulus programs and, until it nears the front, the Euro will likely remain weak.

There were certainly signs last week of an improvement in market sentiment as the chances of an agreement on the US debt ceiling improved, Russian President Vladimir Putin rode to the rescue of natural gas buyers and news filtered out of a possible meeting between US President Joe Biden and Chinese President Xi Jinping.

However, the latest statistics from Germany, the Eurozone’s largest economy, were dire. Factory orders fell 7.7% month/month in August, far worse than the 2.1% forecast, and industrial production dropped by 4.0% when a 0.4% decline had been predicted. It was no surprise therefore that traders willing to inch out of the safe-haven US Dollar found other currencies more attractive than Euros.

Moreover, Bloomberg reported that the ECB is studying a new bond-buying program to prevent any market turmoil when its pandemic emergency support purchases are phased out next year. So not only is the ECB near the end of the queue, it seems to be leaving it; and that’s bad news for the Euro.

Turning to the economic data to be released in the week ahead, the only number of note is the ZEW index of German economic sentiment due Tuesday. Also on the calendar are final figures for German inflation in September and Eurozone industrial production in August Wednesday, and Eurozone trade data for August Friday.