The Euro spent most of this past week aiming lower from the previous one. Taking a look at a majors-based EUR index on the chart below, the currency remains higher than where it was at the beginning of April. Having said that, the Euro has been largely consolidating over the past month. Its performance has been closely tied to spreads between German and United States 10-year government bond yields.

There may have been an overreaction from markets to the April US non-farm payrolls report. A significant miss in job gains and unemployment data dented the US Dollar and Treasury yields. However, the markets seemed to then focus on the inflationary implications of stronger average hourly earnings. This was then amplified by a surge in April consumer prices, with CPI clocking in at its highest since 2008.

Having said that, the Federal Reserve remains dovish and speeches from policymakers continued to underscore this. Meanwhile, the same could be said from European Central Bank officials. Governing Council member Francois Villeroy noted last week that talking about tapering their emergency purchase program (PEPP) ‘is purely speculative’. Yannis Stournaras noted that there is ‘no evidence’ for them to change policy.

In practice, the ECB’s hesitation to adjust policy, for the time being, could minimize the impact of data on monetary policy expectations and thus the Euro. Still, it is worth keeping an eye out for some key economic data. Eurozone GDP, core inflation and Markit services PMI are due in the week ahead. Most attention may be given to CPI, similar to what was witnessed to the US equivalent this past week.

But, still-dovish commentary from ECB President and Chief Economist, Christine Lagarde and Philip Lane respectively, this week could dampen the impact of a stronger inflation print. The Citi Economic Surprise Index tracking Eurozone data outcomes remains elevated, hinting that economists are underpricing the health and vigor of the economic recovery. With that in mind, it is a neutral call for the Euro fundamental outlook. 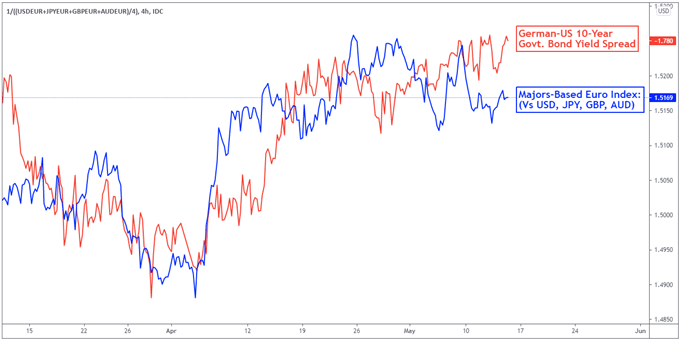