The prospect of a coronavirus vaccine that would halt the pandemic and lead to a global economic recovery prompted a swing by investors out of safe havens like the US Dollar early last week and into riskier assets such as the “value” stocks that have been hit hardest by the worldwide downturn. However, the Euro failed to benefit and EUR/USD lost ground – to the surprise of many analysts.

By Thursday, there were clear signs that the vaccine optimism had gone too far, raising the prospect of a reversal of the earlier moves and even the possibility that the gains in riskier assets had been due simply to short-covering rather than a reversal of the previous trend. If so, EUR/USD – which remains around the middle of the broad 1.16 to 1.20 range in place for almost four months – could well fall further. 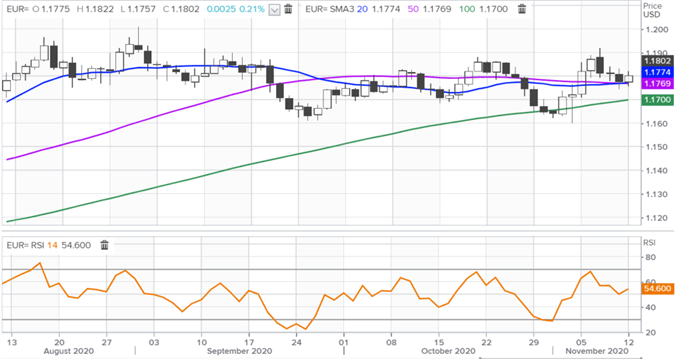 Source: Refinitiv (You can click on it for a larger image)

Recommended by Martin Essex, MSTA
Download our Q4Euro forecast
Get My Guide

From the EUR side of the EUR/USD pair, the most important upcoming event is the meeting of the European Central Bank’s policy-setting Governing Council on December 10 in Frankfurt, where a further easing of monetary policy is all but certain.

Speaking last week, ECB President Christine Lagarde said it is crucial that monetary policy ensures favorable financing conditions for the whole economy and that the central bank will continue to deliver the financing conditions necessary to protect the economy from the impact of the pandemic. She added that the economic recovery from the pandemic could well be bumpy, and hinted at an increase in the duration of monetary support as well as its size.

There was a similar message too from the Bank of Spain’s Chief Economist Oscar Arce, who said the ECB must introduce additional monetary stimulus in December to stave off the risk of Eurozone deflation. “We must act swiftly and forcefully,” he said.

Turning to the economic data, there are only two items of note on the calendar. Wednesday’s final October inflation statistics are unlikely to have an impact but Friday’s “flash” figure for November consumer confidence could be important. The consensus among economists is that a drop to -17.4 from October’s -15.5 is on the cards and such a fall would underline the case for more monetary stimulus next month – probably via both the ECB’s Pandemic Emergency Purchase Program (PEPP) and its Targeted Longer-Term Refinancing Operations (TLTROs). These involve bond buying and cheap loans for banks respectively.