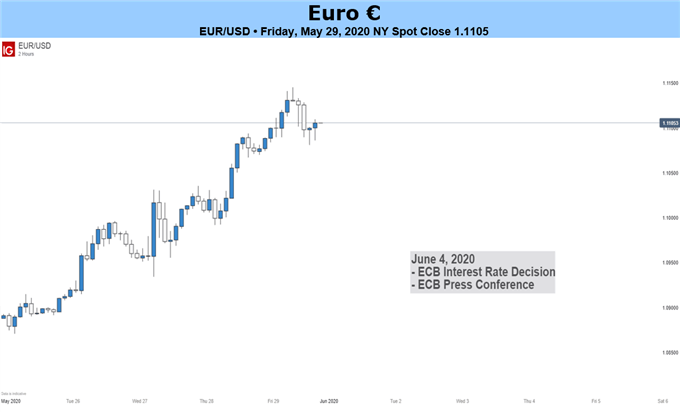 Thursday’s meeting of the European Central Bank’s Governing Council will likely end with Eurozone interest rates being left unchanged. However, chances are high that the ECB will boost still further its spending to counter the economic impact on the Eurozone of the coronavirus pandemic, probably by boosting the €750 billion Pandemic Emergency Purchase Program (PEPP) it launched in mid-March.

Coupled with last week’s proposal by the European Commission to fight the downturn with €500 billion in grants to the member states hit hardest by the outbreak and a further €250 billion in loans, an expansion of the PEPP should convince investors that the various EU institutions are now pulling together, and give the Euro a consequent boost. 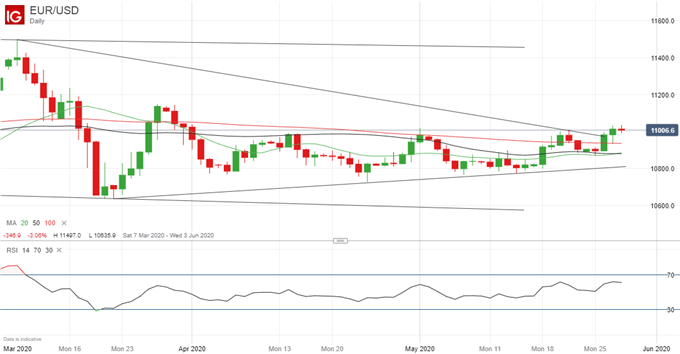 As the chart above shows, EUR/USD broke back up to the 1.10 level in the middle of last week despite more dire economic forecasts, suggesting that confidence in the pair has improved.

ECB President Christine Lagarde predicted that Eurozone output will likely shrink by 8% to 12% this year, adding that forecasts of a mild slowdown are now “out of date”; the Ifo Institute was only marginally more optimistic, predicting a 6.6% contraction. Nonetheless, Eurozone economic sentiment improved in May – albeit by less than expected – according to the European Commission, and the economic damage caused by Covid-19 is now likely fully priced in by the markets.

That suggests that neither Thursday’s updated ECB staff forecasts for the economy, nor Lagarde’s news conference, will likely impact the Euro too much as we know already that the GDP predictions for this year will look awful and that Lagarde will struggle to find anything positive to say.

There is, however, one possible fly in the Euro ointment. The Commission’s proposal for an economic recovery program totaling €750 billion is still far from certain to receive the unanimous approval of EU governments, and could well be modified in the squabbling that will now begin. That, though, is something for long-term Euro investors to worry about, not short-term traders.

Like to know why GDP data are highly significant in the FX market? Here’s our guide to GDP and Forex trading