Euro price outlook: due for a break

The Euro was hit hard last week by a German Constitutional Court ruling that gave the European Central Bank three months to justify purchases under its bond-buying program or lose the Bundesbank’s participation in one of its principal schemes to boost the Eurozone economy.

To make matters worse still, the European Commission predicted that the Eurozone economy will contract by a record 7.7% this year because of the Covid-19 pandemicand that both public debt and budget deficits will surge. This prompted Paolo Gentiloni, the European Commissioner for Economic and Financial Affairs, to declare that “Europe is experiencing an economic shock without precedent since the Great Depression.”

Underlining the point about public debt, Germany, France and Spain all unveiled government bond sales, and the reaction in EUR/USD took the pair back below the 1.08 level for the first time since April 24. 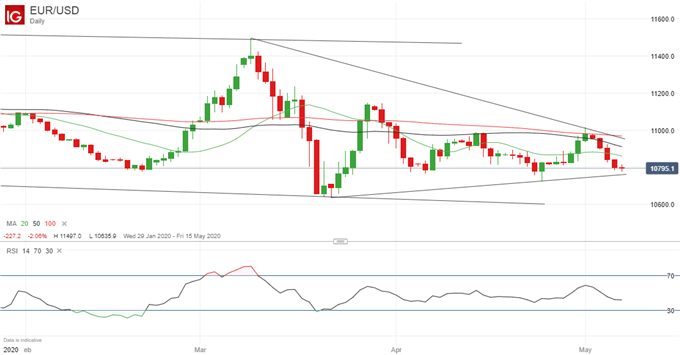 Recommended by Martin Essex, MSTA
Download our fresh Euroforecast for the rest of Q2
Get My Guide

For now, the ECB seems to be the only player in the market trying to ease the Eurozone’s economic pain caused by the spread of the coronavirus – with Eurozone governments still unable to agree on a joint fiscal response. However, the question that needs to be asked in the week ahead is whether market participants have become too negative on EUR/USD.

The latest Commitments of Traders report from the US Commodity Futures Trading Commission showed them less net-long the pair than previously, with short positions creeping higher – arguably a positive signal. As for the technical picture, as the chart above shows, the price is now close to trendline support. If it breaks to the downside, the 1.0636 March low would come into focus but if it holds it could be a base for a rally.

growth numbers for Germany and the Eurozone as a whole could attract attention but there is unlikely to be much of a response given how much has changed since then.

Market movements can be unpredictable but the stop loss can provide protection against losses. To learn more, check out this article in the newly revamped DailyFX education section.