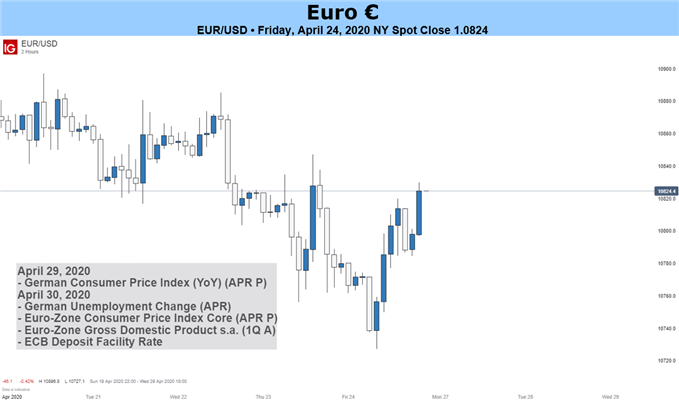 The latest purchasing managers’ indexes for April, released late last week, were uniformly bad, confirming that the global economy will be hit hard by the Covid-19 pandemic. However, the PMIs for the Eurozone still stood out as particularly weak, with the composite index for the region down to 13.5 – by far its lowest reading since the survey began in mid-1998 and considerably below all forecasts in a poll by the Reuters news agency.

The data led IHS Markit, which compiles the figures, to comment that they are “indicative of the Eurozone economy contracting at a quarterly rate of approximately 7.5%” and that “the second quarter looks set to record the fiercest downturn the region has seen in recent history”.

If confirmation were needed, it came from the GfK measure of German consumer confidence, which plummeted to minus 23.4 from a positive 2.3 the month before; way below the forecast -1.7.

Against this background, it was no surprise that EUR/USD continued to slide lower and there are no signs yet that the coming week will see a reversal of the trend unless there is an unexpected burst of market optimism that sparks a flight from the relative safety of the USD into riskier currencies like the EUR. 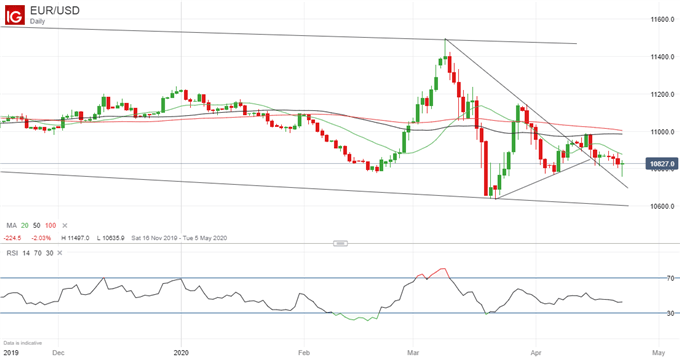 At the same time, the sluggish pace of Eurozone decision making came into focus again last week as EU leaders met once more, by video conference, to decide on the EU’s response to the Covid-19 outbreak. It was the fourth video meeting of its kind and was intended to agree on joint action, with the focus on the single market, investment efforts, global action and on better governance and resilience.

This contrasted with far swifter action to combat the economic impact of the pandemic by countries such as the US and the UK, and provided another reason to be pessimistic about the outlook for the Euro.

Week ahead: ECB meeting in focus

Turning to the economic events scheduled for this week, the spotlight will be on Thursday’s meeting of the European Central Bank. It is almost certain to keep all its key interest rates unchanged but, as ever, it will be the accompanying commentary that could potentially move the markets.

As for the economic data, there are plenty of figures that would normally affect exchange rates but in these exceptional times none will likely do so. The numbers include German retail sales Monday, Eurozone confidence and German inflation Wednesday, and a raft of statistics Thursday including French and Italian first-quarter GDP, German and Eurozone unemployment, and Eurozone inflation.