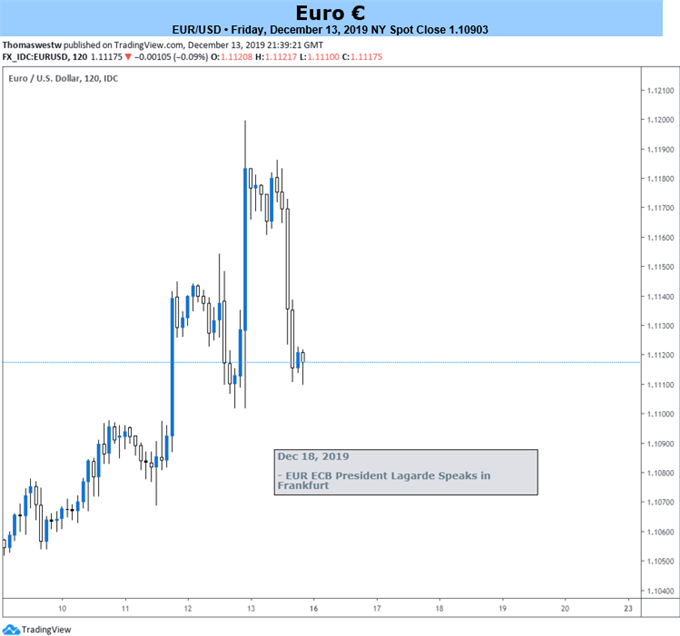 The Euro was treated to a substantial reprieve on the political risk front last week as the Conservative party stormed to a commanding win in the UK general election. That sets the stage for passing the Brexit withdrawal agreement reached between the EU and the government of Prime Minister Boris Johnson.

This seems to all but banish the risk of a disorderly EU/UK divorce in the near term, a positive development for the economic outlook on both sides of the English Channel. Trade deal negotiations are likely to consume traders’ attention from here, but this debate probably won’t get underway in earnest until 2020.

EURO YIELD SHORTFALL MAY RETURN TO THE SPOTLIGHT

Investors may now turn their gaze back to Eurozone economic fundamentals. That could bode ill for the single currency as trade tensions with the US threaten to hurt already sluggish economic growth, locking the ECB in an ultra-dovish policy stance and cementing the Euro’s yield disadvantage.

Looking at 2-year bond yields as a benchmark, the return on owning the single currency lags that of an average of its top counterparts – the US Dollar, Japanese Yen, British Pound and Australian Dollar – by about 133bps. The shortfall shrank from 200bps so far this year, mostly thanks to Fed interest rate cuts.

The US central bank has now signaled its intent to remain in wait-and-see mode for the foreseeable future, preferring to fade into the background through 2020. With unemployment and inflation mostly on-target and a hotly contested presidential election underway, that seems hardly surprising.

What this means for the Euro is that imported improvement in its relative yield position has probably run its course. Meanwhile, local growth is at near-standstill having steadily deteriorated since early 2018. ECB President made clear what this means, saying “an ample degree of stimulus is needed”.

The markets may be reminded as much when December’s Eurozone PMI and German IFOsurveys hit the wires. They are expected to put regional manufacturing- and service-sector activity growth as well as business confidence in the bloc’s largest economy within a hair of two-year lows.

Heightened EU-US trade tensions may be another headwind. Emboldened by an almost-there trade deal with China, the Trump administration might now tighten the screws on its trans-Atlantic partners. Layered atop already sluggish conditions, this likely makes for a lasting yield shortfall. The Euro looks vulnerable.