We are constantly looking to improve our client service and your views matter to us. You can let us know what you think via our Short Online Survey Here.

The Euro remains near highs not seen since over two weeks ago against the US dollar despite the ECB cutting rates further into negative territory and re-booting the bond buying program. The central bank cut the deposit rate by 10 basis points to -0.50% while it also announced that it would launch an open-ended, EUR20 billion a month QE program to commence on November 1. While the cut was fully expected, the QE program with no end date rattled the market and sent EURUSD spinning lower before it rallied sharply higher.

Looking ahead it is difficult to be bullish of the single currency at these levels against a backdrop of weakening growth and stickily-low inflation. The IFO Institute downgrade German 2019 GDP again, to 0.5% from 0.6%, and said that it was likely that German growth would contract by 0.1% in Q3, which would send Germany into an official recession after a similar reading in Q2. Another German institute, IFW, went further this week, cutting Q3 German GDP to -0.3% while 2019 growth was cut back to just 0.4%. 2020 growth was slashed to 1.0% from a prior 1.6%. German growth problems, especially in their export-led sectors, are nothing new but the continual downgrading of growth will weigh further on the single currency.

Tuesday’s German and Euro-Zone ZEW release will be the first focal point for Euro traders. Both the German and the Euro-Zone economic sentiment indicators are currently at lows last seen in December 2011 at -44.1 and -43.6 respectively. The recent escalation in the trade dispute between the US and China, the risk of competitive devaluations and the increased likelihood of a Hard Brexit ‘place additional pressure on already weak (German) economic growth’ ZEW President Achim Wambach noted recently.

EURUSD may find some support a day later when US interest rates are fully expected to be cut by another 25 basis points at the latest FOMC meeting. While a 0.25% cut is fully priced into the US dollar, next week’s meeting will also see the release of the latest summary of economic projections which will give greater detail into the current strength of the US economy.

EURUSD currently trades just below 1.1100 and is unlikely to push much higher – see the latest Technical

Analysis report for in-depth chart levels – against these headwinds. The longer-term downtrend remains. 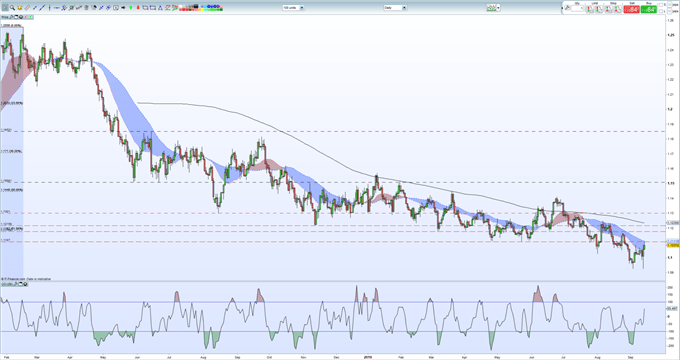 The IG Client Sentiment Indicator shows retail traders are 58.5% net-long of Gold, a bearish contrarian bias. However daily and weekly changes suggest that EURUSD may reverse higher despite traders being net-long.

What is your view on the Euro – bullish or bearish?? You can let us know via the form at the end of this piece or you can contact the author at nicholas.cawley@ig.comor via Twitter @nickcawley1.