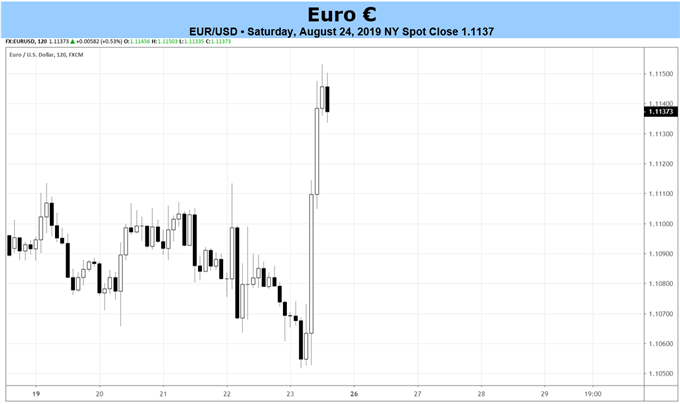 The Euro finished last week broadly higher, with most of its gains coming on Friday amid a flurry of headlines around the US-China trade war. With Federal Reserve Chair Jerome Powell failing to provide the dovish succor that US President Donald Trump sought after, the US quickly retaliated to the Chinese imposition of 5% to 10% tariffs on $75 billion of imported US goods.

By announcing a step-up of existing US tariffs on $250 billion of imported Chinese goods to 30% from 25% on October 1 and placing a 15% tariff (as opposed to a 10% tariff) on an additional $300 billion worth of Chinese imported goods on September 1, US President Trump has escalated the US-China trade war in a materially significant way.

While the US tariffs were announced after markets closed on Friday, EUR-crosses were able to begin pricing in the eventuality thanks to a series of tweets from the US president. EURUSD closed the week higher by 0.48%, but resulted from a 0.53% on Friday (negating the week’s losses otherwise) in the form of a bullish key reversal on the daily timeframe; the scope for more gains is clear.

Elsewhere, with the latest Brexit news suggesting that there may be an avenue for compromise between the EU and the UK, the British Pound was able to scrape back some of its recent losses, and EURGBP closed lower by -0.47%, the worst performing EUR-cross on the week.

The disappointing streak data isn’t unique to the Eurozone; indeed, global growth concerns are afoot amid rising tensions in the US-China trade war. The fact of the matter is that the US-China trade war has made the US Dollar less appealing, giving room for the largest component of the DXY Index (the Euro at 57.6% weighting) greater scope for recovery, even as European economic data has disappointed. 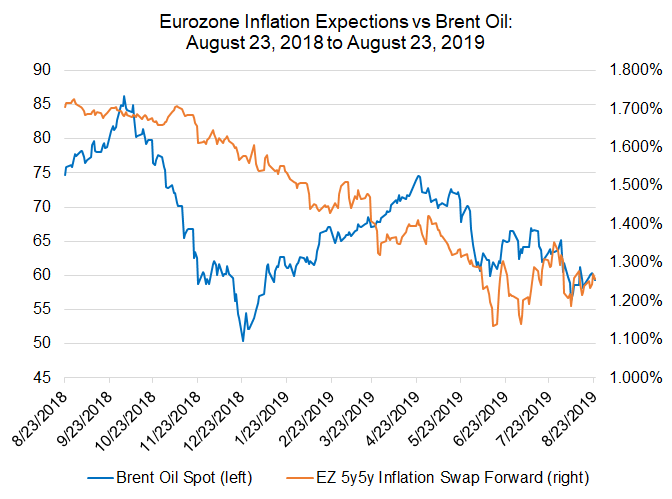 Outgoing ECB President Mario Draghi’s preferred measure of inflation, the 5y5y inflation swap forwards, closed last week at 1.256%, lower than where they were one month earlier at 1.354%, a drop of -9.8-bps. Nevertheless, inflation expectations remain significantly above the yearly low set on June 17 at 1.141%.

Even though ECB President Mario Draghi stayed away from the Federal Reserve’s Jackson Hole Economic Policy Symposium, remarks by Sabine Lautenschläger, Benoît Cœuré, and Philip Lane suggested that the doves remain firmly in control on the Governing Council – even if market participants were hoping for a more aggressive dovish narrative. The message was clear: more monetary stimulus is coming soon. 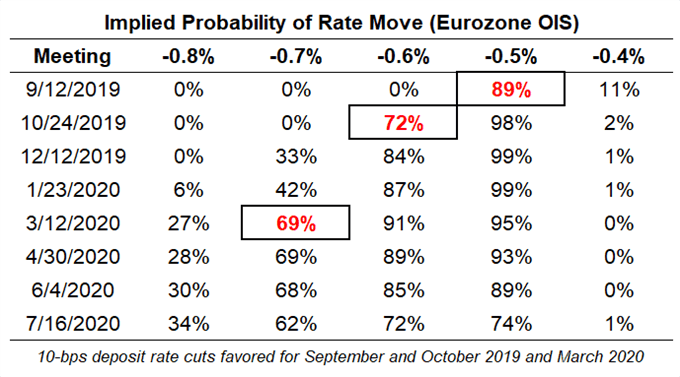 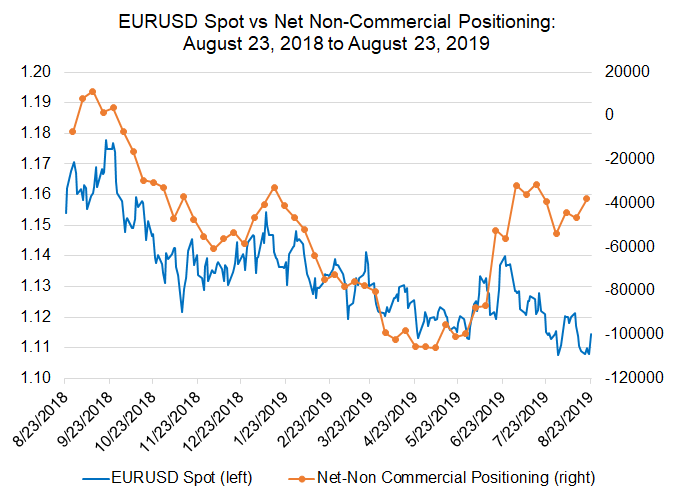 Finally, looking at positioning, according to the CFTC’s COT report for the week ended August 20, speculators decreased their net-short Euro positions from 46.7K to 38K contracts. Prior to Q3’19, net-short Euro positioning was in a similar state back in November and December 2018, and January and February 2019; EURUSD was trading around 1.1300-1.1400 during those times. A short covering rally by EURUSD could quickly see prices readjust to the topside.