Earlier this month, we highlighted thatthe European Central Bank and Mario Draghi could reignite the currency’s downtrend. Since the prior weekly Euro forecast the EXY Euro Index has dropped roughly 0.9 percent amid weakness particularly against the US Dollar and Japanese Yen. 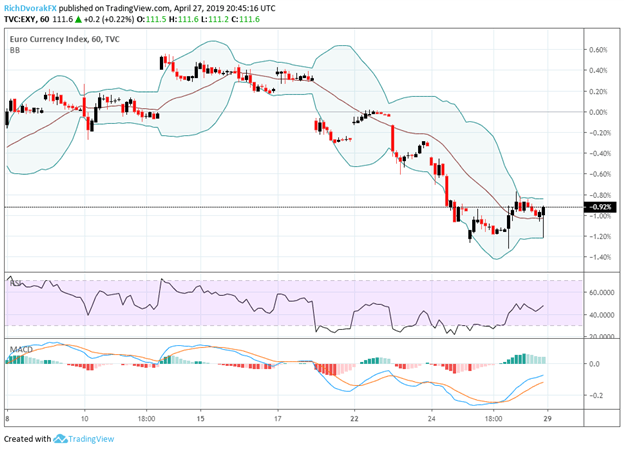 In response to sustained Eurozone weakness conveyed in the bloc’s dismal economic data, the ECB has grown increasingly dovish as the central bank aims to shore up market confidence and improve eroding EUR fundamentals. Consequently, the Euro is now down 1.6 percent year-to-date.

Next week, however, Eurozone GDP and Inflation data will be released which could provide EUR traders with a reason to celebrate if the high-impact economic readings are reported better than expected.

Although, economic data has generally fallen below consensus as of late – like the ZEW Survey of Expectations, Eurozone Consumer Confidence and PMI numbers to name a few.

Moreover, Eurozone Q4 GDP data was reported 0.1 percent below forecast. That being said, another miss on economic growth will likely cause additional downside in the Euro. 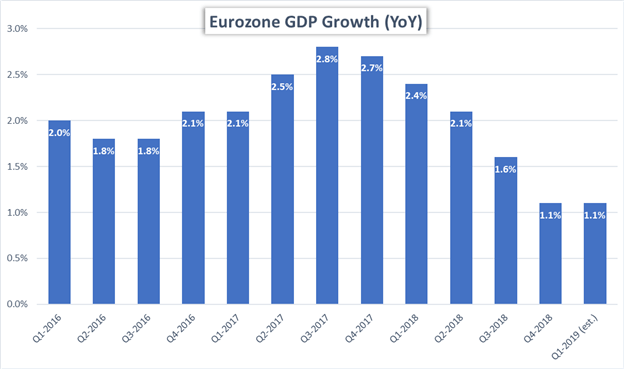 EURUSD will be worth watching considering US GDP released last week smashed expectations by a full percentage point – further divergence in economic performance between the US and Eurozone has potential of extending recent downside in spot prices.

Although, the Federal Reserve’s FOMC meeting on Wednesday could weigh heavily on the currency pair. Also, the possibility of a flare up in trade relations between the US and EU remains a risk that could threaten bullish Euro prospects. 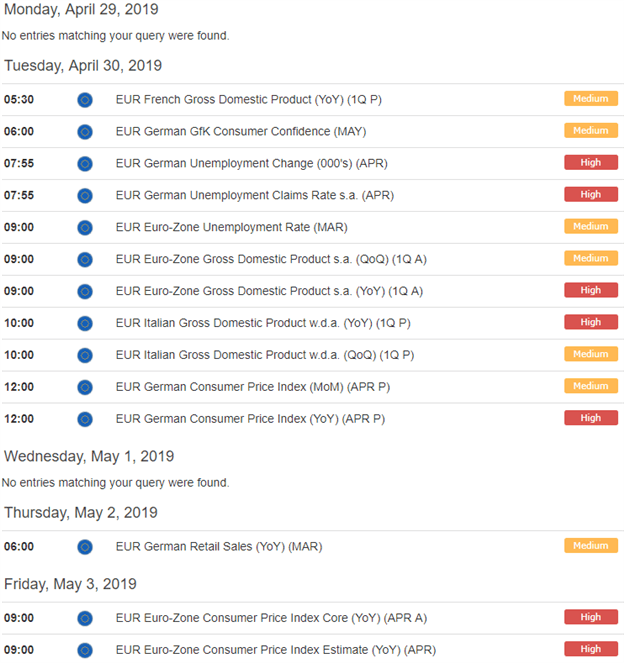 Also, EURJPY should be kept on every trader’s radar considering next week’s potentially market-moving data happens to be scheduled for release during Japan’s Golden Week where the country’s financial markets will be closed all week in observation of its 10-day stretch of holidays.

The lack of Japanese liquidity heightens the risk of possible flash crashes which could become even more likely if Eurozone GDP drastically disappoints.