The DailyFX Q2 EUR Forecast is available to download including our short- and medium-term look at the Euro.

The single-currency is seemingly friendless against a raft of other currencies and looks set to move lower, shifting my forecast to bearish from neutral despite the current lowly levels. Not only are fundamentals looking negative, the EURUSD chart looks weak in the short- to medium-term with little in the way of support seen.

This week’s Euro-Zone data prints have been fairly neutral, but all remain at lowly levels with no encouraging signs seen in the releases. German manufacturing continues to sit at multi-year lows with the EZ’s economic export engine still suffering from the diesel emissions scandal, a growth slowdown in China, heightened US-EU trade fears and Brexit. This week the German finance ministry confirmed market rumors that the country’s 2019 growth would be a mere 0.5%, down from earlier tepid, expectations of 1% and sharply lower than the 2.1% predicted one year ago. Economic sentiment remains weak, and Germany now needs to work out how to boost growth via government investment and increased public consumption to make up for export-related losses. It is highly unlikely that the ECB will, or can, loosen monetary policy further as even lower – more negative – interest rates will rile German savers and put the Euro-Zone banking sector under further strain.

There could be worse to come. If US President Trump continues to look at additional tariffs on Euro-Zone exports, the EU will retaliate, leaving it in a no-win situation, while a No Deal Brexit – highly unlikely – would leave the single-block at risk of further taxes and tariffs. In 2017, the UK exported goods to the value of £274 billion to the EU while trade the other way saw the EU export £341 billion of goods to the UK, a £67 billion difference that in a No Deal Brexit would be under threat.

Next week’s economic calendar is thin with just German IFO readings on Tuesday and retail sales at the end of the week. The week’s highlight will likely be the ECB Economic Bulletin on Wednesday which should provide more analysis of economic and monetary developments in the single-zone.

EURUSD currently trades around 1.1250 and nears old horizontal support at 1.1216. A break below exposes 1.1176 the recent 22-month low. Lower highs continue to dominate the chart and the pair trade below all three moving averages.

Looking for a technical perspective on the EUR Dollar? Check out the Weekly EUR Technical Forecast. 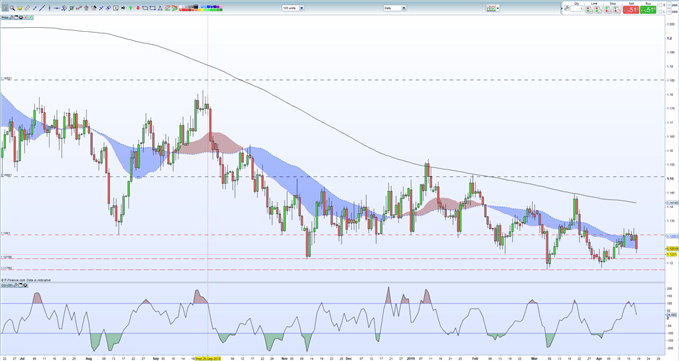