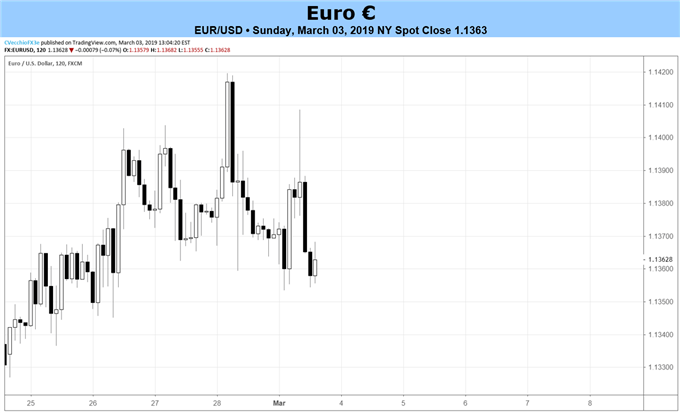 - The January inflation reading came in at 1.5% y/y, well-below the ECB’s medium-term target, while topline growth slowed to +1.2% y/y in Q4’18. These conditions speak to a central bank that is likely to make dovish shifts at the margins of its otherwise ‘neutral’ policy stance.

- There will be discussion about another stimulus program, but the ECB’s Governing Council won’t opt for another TLTRO program at the March policy meeting.

- The IG Client Sentiment Index shows that traders are paring back their net-long EURUSD exposure.

A week where the Euro finally broke away from the middle of the pack may prove short lived with the European Central Bank’s March policy meeting around the corner. Following four weeks straight in which the Euro was either the fourth or fifth best performing major currency (out of eight), the Euro was the second best performer as the calendar flipped from February to March, with only EURGBP heading lower (-0.87% on the back of Brexit developments). With global equity markets rallying and Gold prices plummeting, EURJPY added 1.33%, while EURCAD gained a best 1.48% as energy prices pulled back.

An objective look at European economic data shows that conditions have been improving, relatively speaking, over the past few weeks. Following up with the February PMI readings coming in slightly above expectations, we’ve seen January German Retail Sales and February German labor market reports come in better than economists’ forecasts. As a result, ahead of the March ECB policy meeting, the Citi Economic Surprise Index for the Eurozone moved up to -61.6 on March 1 from -64 a week earlier, up further from -77.3 on February 1.

As we’ve discussed recently, one major reason undergirding Euro strength in the past few weeks could be stability in the conditions around inflation starting to stabilize. ECB President Mario Draghi’s preferred measure of inflation, the 5-year, 5-year inflation swap forwards, closed last week at 1.499% - little changed from where it was a month earlier at 1.508%, but off the two-year low set on February 22 at 1.430%. The continued rebound in energy prices is helping, with Brent Oil prices up by +3.7% since February 1.

How the ECB Reacts at their March Policy Meeting

Even as economic data momentum has improved and inflation expectations have stabilized, the fact of the matter is that both market measures and realized data have showed that GDP and CPI are underperforming the ECB’s Staff Economic Projections back in December. The upcoming March Staff Economic Projections are very likely to see the 2019 inflation (December SEP: 1.6%; March SEP likely to 1.5%) and growth forecasts (December SEP: 1.7%; March SEP likely to 1.3-1.4%) knocked lower as a result; but the 2020 and 2021 forecasts are likely to stay intact.

While there will be some discussion of a potential funding cliff as ECB stimulus measures reach the end of their shelf life, it seems unlikely that another TLTRO is in the works for the March policy meeting. If “more monetary evidence” was required for such a policy move, not much evidence has materialized beyond weak topline economic data (corporate and sovereign credit spreads remain tame).

Accordingly, the previous hints at a hike to the deposit rate sometime around “summer 2019” should be eliminated completely by now; a June hike is almost certainly out of the question. But rates markets aren’t ready to throw in the towel for 2019 altogether, with overnight index swaps still pricing in a 53% chance of a move by December. Being pragmatic, it’s difficult to imagine that the new ECB president makes a policy change at their first meeting with new Staff Economic Projections, so any rate move in 2019 is realistically dead.

Lastly, it can’t be understated how forthcoming changes in ECB leadership may be giving the Governing Council pause on how to embark on its next move. ECB Chief Economist Peter Praet is stepping down midyear, with Philip Lane set to take over the post in June. Meanwhile, ECB President Draghi’s term expires in October, but no replacement has been named yet; current Governing Council member Francois Villeroy de Galhau and former member Erkki Liikanen are considered top contenders. It’s difficult to foresee a Draghi-led Governing Council hamstringing the next ECB president in a manner that Jean-Claude Trichet did to the current ECB president on his w out in 2011.

The US government shutdown from December 23 to January 25 is still having an impact on the release schedule for the CFTC’s COT report. As such, the CFTC’s COT report released on Friday was for the week ended February 19, and it showed that speculators had increased their net-short Euro positions to 74.9K contracts from 63.9K net-short contracts reported for the February 12 period. The CFTC’s COT report is almost a reliable source of positioning again, but still not quite yet; instead, traders may want to look to the IG Client Sentiment Index.