Euro Forecast: Upside Likely Constrained with CPI Due at End of Week 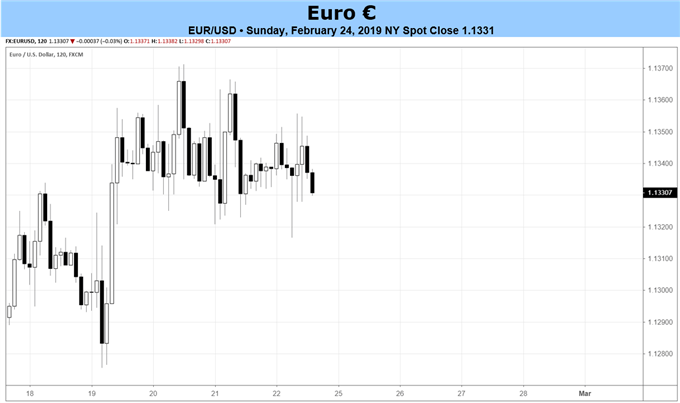 - The IG Client Sentiment Index shows that traders are paring back their net-long EURUSD exposure.

Another week has passed in which the Euro has been neither the best nor the worst performing currency, producing another middling performance as external factors continue to dominate traders’ attention. In a sense, the Euro’s performance last week was a microcosm of its performance in 2019, finishing in the middle of the pack: gaining ground against four currencies (EURUSD, EURAUD, EURJPY, and EURNZD) while losing ground against the other three (EURCHF, EURCAD, and EURGBP).

Contributing to Euro stability in the past two weeks may be stability in the conditions around inflation starting to stabilize. True, market measures of inflation continue to slump – the 5-year, 5-year inflation swap forwards, ECB President Mario Draghi’s preferred market gauge of inflation expectations, fell to its lowest closing level in over two years at 1.430% last week. But energy prices are rebounding, with Brent Oil prices up by +8.9% over the past four-weeks.

Sprinkle in a soft trade-weighted Euro (-3.73% since February 22, 2018), and the conditions are in place for the decline in inflation readings to level off. The upcoming initial February Eurozone Consumer Price Index on Friday should confirm this theory, where headline CPI is due on hold at +1.5% y/y.

In line with inflation readings leveling off, economic data momentum has started to improve, helping underpin recent stability in the Euro. The February PMI readings were better than expected last week, and now the Citi Economic Surprise Index improved to -64 by February 22, up from -88 on January 25.

The Brexit saga continues to be at center stage for EURGBP, whose price action is merely a reflection of near-term sentiments regarding the whole situation. Key deadlines are quickly approaching, with UK parliament set to take control of the UK side of negotiations after February 26. Additionally, UK Prime Minister Theresa May is weighing ditching a March 12 vote on her Brexit plan. Needless to say, it seems highly likely that an extension is possible beyond the March 29 Brexit deadline. Any development that reduces the odds of a no deal, ‘hard Brexit’ will weigh on EURGBP, plain and simple.

Elsewhere, with the US-China trade war negotiations are rightfully near the center of attention – a key March 1 negotiating deadline is approaching – it seems that the EU is being dragged into its own trade dispute with the US. Quips between US President Donald Trump and EU President Jean-Claude Juncker over US agricultural and EU automobile imports/exports threaten opening up a new chasm in trade, already a growing obstacle to global growth thanks to the Sino-American tiff.

The US government shutdown from December 23 to January 25 is still having an impact on the release schedule for the CFTC’s COT report. As such, the CFTC’s COT report released on Friday was for the week ended February 5, and it showed that speculators had increased their net-short Euro positions to 52K contracts from 46.7K net-short contracts reported for the January 29 period. The CFTC’s COT report is still not a fully reliable source of positioning at present time; instead, traders may want to look to the IG Client Sentiment Index.