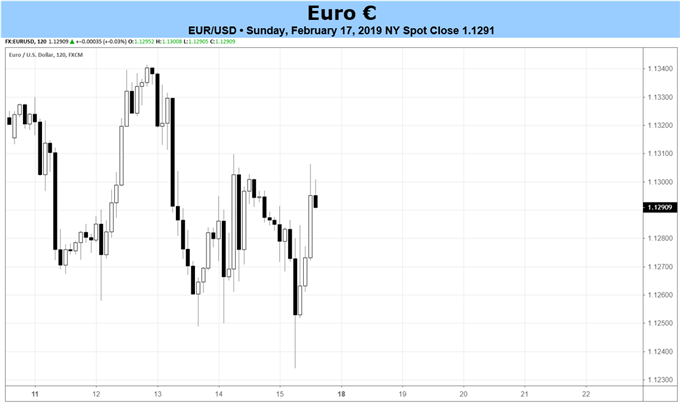 - The Euro continues to follow global risk trends: with equity markets rallying, the Euro gained against the safe havens and lost ground against the commodity currencies.

The Euro continues to trade along the lines of global risk trends, finishing as either the fourth or fifth best performing major currency for the fourth consecutive week in a row. Commodity currencies and safe havens continue to trade on opposite sides of the spectrum, underscoring a trading environment that has largely been taking cues off of what has been happening in global equity markets. EURNZD and EURAUD were the two worst performing pairs, dropping by 2% and 0.94%, respectively, while EURCHF and EURJPY were the top performers, adding 0.21% and -0.39%, respectively.

Typically, neither the Eurozone nor German ZEW Surveys much interest in any given month. However, over the past two releases, the Euro has moved in excess of +/-0.2% around the release, suggesting that attention has indeed returned to the ‘high’ ranked events. Certainly, provided the context of a deteriorating economic backdrop for the Eurozone, traders are proving more interested in proximal trackers of growth in order to try and ply additional insight into the European Central Bank’s next policy move.

As it were, with gauges of economic data momentum continuing to sink, it’s likely that the February ZEW surveys reveal more disappointing news about the state of play in the Eurozone when they are released on Tuesday. Likewise, the preliminary February Eurozone and German PMI readings due out on Friday will show that proximal trackers are still suggesting growth coming in below +2% annualized in Q1’19.

Another New Low for Inflation Expectations Dogs the Euro

Despite what’s been an extended reversal in energy prices, market measures of inflation continue to slump, suggesting that a more significant economic slowdown is afoot in the Eurozone. The 5-year, 5-year inflation swap forwards, ECB President Mario Draghi’s preferred market gauge of inflation expectations, fell to its lowest level in over two years at 1.418% last week. For some context, this market measure of inflation peaked last year, in January, at 1.774%. Accordingly, traders should expect ECB policymakers to take on a more dovish tone moving forward.

One key exogenous influence is now off the field of play with another US government shutdown avoided at the end of last week. But US political concerns are not entirely resolved, least of which is the US-China trade war and its impact on EURUSD (and beyond). The sixth round of negotiations wrapped up this week with vague promises for resolution, and it now appears that the March 2 deadline could be pushed back as negotiations continue.

The prospect of reduced tensions between China and the US has proven good for global equity markets, which is having a knock-on effect to commodities and thus pairs like EURAUD, EURCAD, and EURNZD. Meanwhile, with Brexit proving tenser, EURGBP continues to see increased intraday volatility regardless of economic data developments.

The US government shutdown from December 23 to January 25 is still having an impact on the release schedule for the CFTC’s COT report. As such, the CFTC’s COT report released on Friday was for the week ended January 22, and it showed that speculators had increased their net-short Euro positions to 41.1K contracts from 32.6K net-short contracts reported for the January 15 period. The CFTC’s COT report is still not a reliable source of positioning at present time; instead, traders may want to look to the IG Client Sentiment Index.