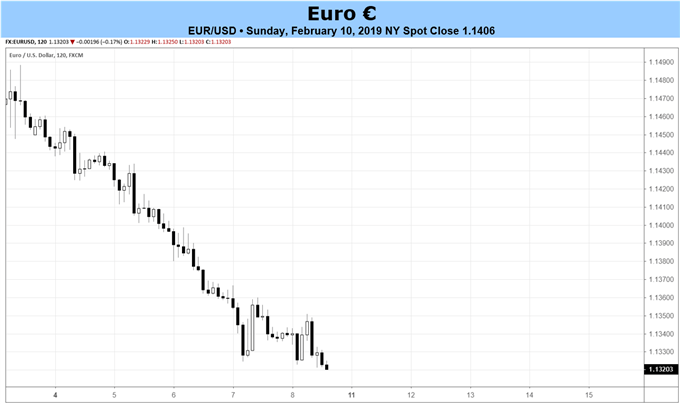 - The Euro ended the week in the middle of the pack again, and there was a clear ‘risk off’ tone to the week given that EURCHF, EURJPY, and EURUSD were the worst performers.

- The first revisions to the Q4’18 German and Eurozone GDP reports should show a greater slowdown in growth than initially measured.

The Euro had another run-of-the-mill week, gaining ground against three currencies, while losing ground against the other four. A breakdown of the various EUR-crosses showcases a clear shift in risk appetite. EURUSD was the worst performing pair, dropping by -1.17%, followed by EURJPY at -0.96%. Meanwhile, the Euro’s best performance came against the Australian and New Zealand Dollars (EURAUD +1.09%; EURNZD +1.17%). That the three safe haven currencies were the top performers and the three commodity currencies were the worst performers should be a warning sign, one that portends of potentially more weakness to come in risk-correlated, high beta assets.

One of the main drivers of Euro weakness in recent weeks has been the widening gap between the European Central Bank’s growth expectations and how actual data have materialized. The coming week’s top economic data releases should further underscore the need for the ECB to keep its extraordinary monetary stimulus in place, despite the Governing Council’s best laid plans to raise rates by sometime around “summer 2019.”

The revision to Q4’18 German GDP is due to show that the Eurozone’s largest economy only grew by +0.8% in 2019, down from the +1.1% rate initially reported. A significant decline in the German reading should weigh down the Q4’18 Eurozone GDP reading, which first checked in at +1.2% (y/y). After last week’s economic figures, the Citi Economic Surprise Index remained deep in the red at -80.1, down from -77.3 at the end of last week, and only slightly higher than where it was one month ago at -88.6.

Brexit, Trade Wars, US Government Shutdown All in Play

While most of the EUR-complex has been trading largely along the lines of global risk dynamics – the safe haven crosses and commodity crosses are moving in opposite directions – two pairs are still under the sway of significant exogenous influences that could cause them to decouple. EURGBP, of course, continues to be guided by Brexit (and for that matter, all of the GBP-crosses are in the same boat). Any single development that materially changes the odds of a no deal, ‘hard Brexit’ will dictate outcomes for EURGBP, regardless of whatever is happening with Eurozone economic data. Elsewhere, EURUSD brief reprieve away from US political influences is now over, with another US government shutdown possible at the end of the week and the deadline for the US-China trade war détente in three weeks.

Market-measures of inflation expectations remain under significant pressure, which have historically – and currently – been glove-in-hand with a more difficult trading environment for the Euro. The 5-year, 5-year inflation swap forwards (ECB President Mario Draghi’s preferred market-measure) finished last week at 1.440%, a fresh 52-week low. To this end, this measure of inflation peaked in January 2018 at 1.774%. Between the underwhelming GDP figures and ongoing deterioration in inflation expectations, it’s seems if it’s only a matter of time before the ECB takes on a more dovish tone.

Positioning Data Being Released Once More, but Still On a Delay