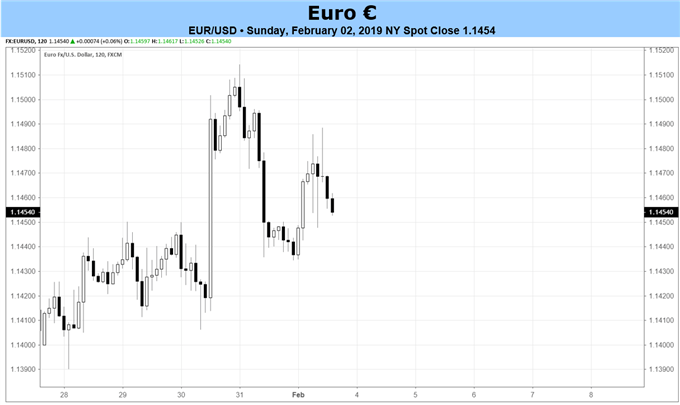 - Both Q4’18 Eurozone GDP and January Eurozone CPI confirmed that economic activity is slowing for the region, underscoring the European Central Bank’s change in tone at their most recent meeting.s

- The IG Client Sentiment Indexshows that traders have increased their long EUR/USD positioning during the latest turn lower.

The past week’s key economic data releases confirmed the dour tone deployed by the European Central Bank at its January policy meeting. Q4’18 Eurozone GDP showed that the region only grew by +1.2% in 2019, down from the +1.6% rate seen in Q3’18. Similarly, the January Eurozone Consumer Price Index showed topline inflation falling from +1.6% to +1.2% (y/y), more evidence that economic activity faced headwinds through the turn into the New Year.

In the week ahead, there aren’t any economic data releases that come close in comparison to either a GDP or CPI report. In fact, there are no ‘high’ rated data releases due out at all, relieving the Euro of its own destiny as other factors will dominate trading conditions. But the backdrop for the Euro isn’t necessarily a good one. After last week’s economic figures, the Citi Economic Surprise Index remained deep in the red at -77.3, improved from -88 at the end of last week, but still lower than where it was one month ago at -75.1.

Inflation Environment Remains Weak – Which is bad for the Euro

Aside from the official statistics, market-measures of inflation expectations have turned lower again, which have typically gone in-hand with a more difficult trading environment for the Euro. The 5-year, 5-year inflation swap forwards (ECB President Mario Draghi’s preferred market-measure) finished last week at 1.508% after touching a fresh 52-week low at 1.495% on January 30. To this end, this measure of inflation peaked in January 2018 at 1.774%. If anything, traders should anticipate a dovish turn in commentary from ECB officials over the coming weeks (the Governing Council’s Yves Mersch speaks on Monday and Thursday; Vitor Constancio speaks on Thursday).

In consideration of the light economic calendar for the Euro, it’s almost certain that the major EUR-crosses will be guided by factors external to the Eurozone: EUR/GBP will still be guided by Brexit as a rock (UK Prime Minister Theresa May’s desire to renegotiate the Withdrawal Agreement) has recently met a hard place (the EU refusing to renegotiate the Withdrawal Agreement; EUR/USD still by the US-China trade war and the burgeoning prospect of another US government shutdown on February 15; and EUR/AUD, EUR/CAD, EUR/JPY, and EUR/NZD by movements in global equity markets.

Positioning Data Being Released Once More, but On a Delay

Finally, after weeks without an update thanks to the US government shutdown, the CFTC has started to release its COT report again. However, all of the late data won’t be released at once. Starting this past Friday, the tardy data will be released every Tuesday and Friday until caught up to present day. As such, the CFTC’s COT report released on Friday was for the week ended December 25, and it showed that speculators had increased their net-short Euro positions to 58.5K contracts from 53.1K net-short contracts held previously. The CFTC’s COT report is still not a reliable source of positioning at present time; instead, traders may want to look to the IG Client Sentiment Index.