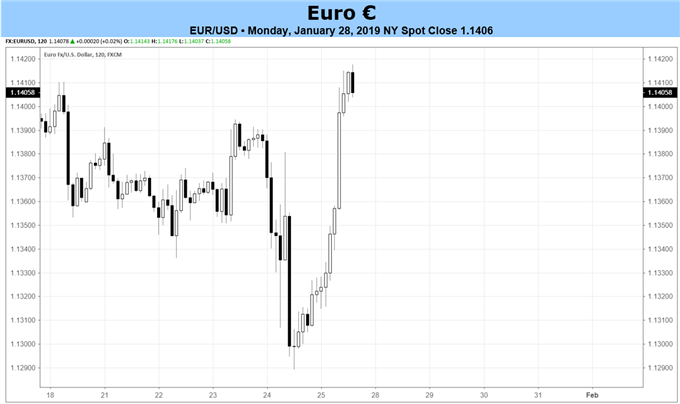 - The Euro was the worst performing major currency last week following the ECB rate decision, although gains on Friday masked what was otherwise a weak performance.

- Quieter calendar in the first few days of the new week relegates Euro to the backburner as a major focus in FX markets – attention still on Brexit, the US-China trade war negotiations, and the US government shutdown.

The Euro had a topsy-turvy week, having entered Friday as the worst major performing currency only to find itself in the black by the end of the day and week. In a sense, Friday’s gains by EUR/USD – the backbone of the move higher in the EUR-complex – has helped mask some of the weakness that was otherwise setting in. With external factors still weighing heavily, such as the US-China trade war, the US government shutdown, and the Brexit negotiations, the Euro will once again be taking a backseat as a major influencer in the coming days. For the few important data releases, upcoming Eurozone GDP and inflation data will underscore the concerns laid out by the ECB last week.

ECB Attitude Softens at the Margin

ECB President Mario Draghi and the Governing Council’s decision last week to keep policy on hold was not much of a surprise to anyone. At a meeting without a new set of Staff Economic Projections, Draghi was more or less hamstrung to sit on his hands and do nothing. But there was also a sense, given the market reaction last week, that Draghi & co may not be complacent for much longer. While no new easing program was announced, Draghi did note that he needs to see the “monetary case” for another TLTRO, for example. To this end, with inflation having fallen back in a significant manner, it’s possible that the ECB ultimately abandons its plans for a rate hike sometime around “summer 2019.” For now, the ECB is holding the course, but as Draghi noted, the outlook for the Eurozone is no longer “broadly neutral” and has indeed worsened in recent months. In all likelihood, ECB doves will become more apparent in the months ahead.

The week after an ECB meeting can usually be somewhat of a letdown, but with the initial Q4’18 Eurozone GDP report due on Thursday and the preliminary January Eurozone Consumer Price Index due on Friday, the second half of the week should produce significant price action – at least, price action with the Euro closer to the center of attention.

Unfortunately for the Euro, the two major data releases will underscore the concerns the ECB laid out at its meeting last week, leaving the Euro in a vulnerable position come Thursday and Friday. Q4’18 Eurozone GDP is due in at +1.2% from +1.6% annualized, a significant step backwards for an economic bloc that was supposed to be far removed from weak growth conditions by now. Similarly, with growth slowing, inflationary pressures have been fading: the January Eurozone CPI report is due in at +1.4% from +1.6% y/y. Neither report should alleviate concerns that the ECB will need to put to rest its best laid plans of ending its ultra-accommodative monetary policy in 2019.

Finally, in terms of positioning, the CFTC’s COT report for the week ended January 22 showed…nothing. The US federal government shutdown means that the CFTC has shuddered its doors; no reports have been released since December 21 (per cftc.gov). The most recent figures we have available are three-weeks old at this point. For the week of December 18, speculators had decreased their net-short Euro positions to 53.1K contracts, a drop from 56.3K net-short contracts held previously. Positioning had become interesting once more, but this is not a reliable source at present time. Instead, traders may want to look to the IG Client Sentiment Index for insight as to positioning.