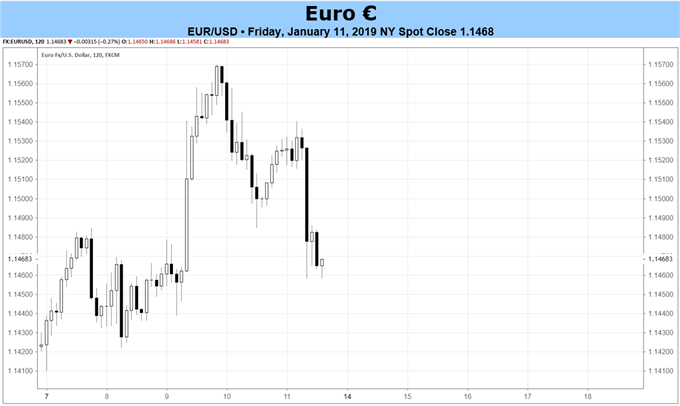 - Upcoming inflation figures suggest that the ECB may have to use its January policy meeting to underscore its commitment to its ultra-loose monetary policy stance.

- The IG Client Sentiment Index shows that traders have trimmed their net-long EUR/USD positions in a minor fashion over the past week.

The Euro had a middling first full week of 2019, gaining against three currencies while losing ground against four others. The biggest loser, EUR/NZD, was only down by -0.83%, while the top performing cross, EUR/USD, added a mere +0.65%. Absent meaningful data on the economic calendar, the Euro was largely left to the machinations of the other major currencies and developments along their own fault lines: the US government shutdown; the US-China trade war; Brexit; and rising geopolitical tensions in the Syria theater.

The coming week, however, should provide information that will have a direct influence over the EUR-complex. Thursday’s December Eurozone CPI report is the final significant data release before the January European Central Bank Policy meeting (January 24), and the data may provide cover for the ECB to shift its forward guidance (and therefore, rate hike timing) in a more dovish direction.

Even though energy prices have stabilized over the past month – Brent Oil closed this week at $60.59/brl, up from $60.28/brl on December 14, 2018 – inflation expectations continue to trend lower. The 5-year, 5-year inflation swap forward, ECB President Mario Draghi’s preferred market gauge of inflation, has fallen by -6.3-bps over the same time period, from 1.618% to 1.554% on January 11.

Accordingly, traders may want to keep expectations around the Euro tempered this week in the run-up to the December inflation report. While Core CPI is due in on hold at +1.0% y/y, the headline CPI reading is set to decline to +1.6% from +1.9% y/y. The trend of weakening inflation runs contrary to one of the four criteria the ECB considers when adjusting its ultra-loose monetary policy: inflation will be durable and stabilize around those levels with sufficient confidence.

Outside of the December Eurozone CPI report, there’s not much for traders to look to explicitly over the coming days that will influence the Euro beyond a passing reaction. Accordingly, instead of looking at the individual trees, a top-down view of the forest is appropriate. From up here, the view doesn’t look good: weakness in Q4’18 has clearly spilled into Q1’19. The Eurozone Citi Economic Surprise Index ended the week at -88.6, down from -76.2 one month earlier. The story of ongoing economic weakness is really the same story of last year: the Eurozone Markit PMI Composite was 58.8 in January 2018 and closed December 2018 at 51.1.

Finally, in terms of positioning, the CFTC’s COT report for the week ended January 8 showed…nothing. The US federal government shutdown means that the CFTC has shuddered its doors; no reports have been released since December 21, 2018 (per cftc.gov). The most recent figures we have available are three-weeks old at this point. For the week of December 18, speculators had decreased their net-short Euro positions to 53.1K contracts, a drop from 56.3K net-short contracts held previously. Positioning had become interesting once more, but this is not a reliable source at present time. Instead, traders may want to look to the IG Client Sentiment Index for positioning insight.