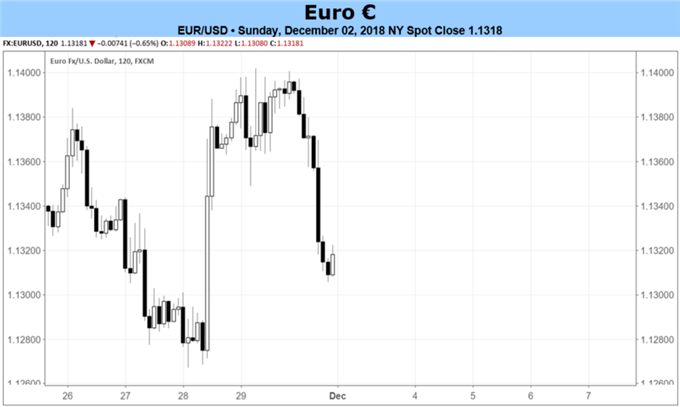 - Both Italian politicians and European policymakers in Brussels remain entrenched in their respective negotiating positions, and now the European Commission is ready to punish Italy.

- EUR/USD downside may be somewhat limited, particularly after the US Dollar’s fundamental backdrop eroded last week thanks to the Federal Reserve.

A broad rebound in risk appetite propelled higher yielding currencies and risk-correlated assets higher at the end of November, leaving the Euro decidedly mixed by the end of last week. EUR/NZD and EUR/AUD led the way lower, dropping by -1.52% and -1.19%, respectively, while EUR/JPY was the top performing EUR-cross, adding +0.36%. Meanwhile, with concerns about Brexit persisting, EUR/GBP was able to edge higher by +0.33%.

Data released on Friday was particularly concerning for the Euro, as the most important data release of the week also proved to be the most disappointing. The preliminary November Eurozone CPI came in at +2.0% from +2.2% (y/y), while the core CPI reading registered +1.0% versus +1.1% expected (y/y). These data have mirrored the decline in inflation expectations in recent weeks, with the 5-year, 5-year inflation swap forwards dropping from 1.679% to 1.625% over the past four-weeks.

Put into context of the recent drop in energy prices (Brent Oil is down by -19.4% over the past month) and the relative elevation of the trade-weighted Euro (+1.42% y/y thanks largely due to EUR/GBP) it would seem that a soft patch of inflation is due ahead. These facts may very well give the European Central Bank another reason to push back its timeline for its first rate hike, even if it does follow through with ending its QE program later this month. After all, in recent meetings policymakers have openly riffed on another TLTRO (in lieu of continuing the QE program).

The coming week will offer very little on the economic calendar, at least in terms of information that will be as important as the preliminary inflation data seen at the end of last week. The final Q3’18 Eurozone GDP release may garner some attention, but given that this is second revision, odds of a significant change (and thus, market reaction) to the headline print are thus limited. In general, Eurozone economic data has been largely disappointing, with the Eurozone Citi Economic Surprise Index having further eroded from -56.7 on November 2 to -62.9 on November 30.

Otherwise, the festering Italian debt crisis will return to forefront for market participants. From the perspective of Italian politicians in Rome, there is a desire fulfill key campaign promises, which will lead to increased deficit spending in the near-term. For European policymakers in Brussels, the concern is that large deficits will raise the odds of a larger-scale Greece-style crisis (Italy’s debt-to-GDP ratio is 130%) for the Eurozone’s third-largest economy.

With the European Commission moving towards a debt-based excessive deficit procedure which could culminate in a fine worth 0.5% of GDP – roughly €9 billion – it seems more tension is destined in the near-term. The vote on the excessive debt procedure would take place in late-January 2019, so there is still time for negotiation and de-escalation; the clock is ticking.

Lastly, in terms of positioning, according to the CFTC’s COT for the week ended November 27, speculators increased their net-short Euro positions to 55.1K contracts, an increase from the 47.2K net-short contracts held in the week prior. Positioning has started to become interesting once more, but still remains on the historically light side and thus the risk of capitulation (short covering that would send the Euro sharply higher) remains low.