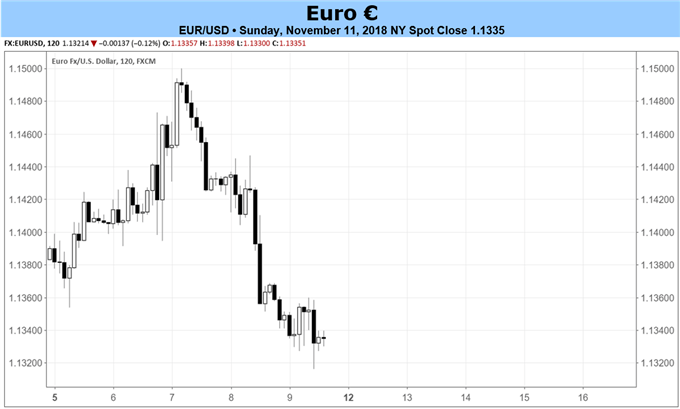 - Continued tension around Italy’s budget keeps the tone around the Euro bearish, as neither Brussels nor Rome appears ready to compromise on their respective demands.

- Incoming economic reports aren’t likely to be helpful for the Euro, as revisions to already-released data will remind market participants about slowing growth momentum in the Eurozone.

The Euro continued its streak of underperformance last week, losing ground against five of the seven major currencies, while extending its weekly loss streak against the US Dollar to four in a row (and six of the last seven; EUR/USD lost -0.46% last week). EUR/NZD and EUR/AUD continued to lead the way lower alongside widespread gains by risk-correlated assets, dropping by -1.66% and -0.92%, respectively. To this end, ongoing strength in equity markets allowed EUR/JPY to stay afloat by a meager +0.10%.

As the calendar now turns into the middle of November, it seems likely that the catalysts that have guided the Euro lower in recent weeks will remain in place. Concerns about flailing growth momentum won’t be shaken off, as the second revision to the Q3’18 Eurozone GDP report will remind market participants about weakness on the economic data front. The Citi Economic Surprise Index for the Eurozone is currently at -55.8, down from -24.8 one month ago.

Similarly, the final release of the October Eurozone CPI report will show that price pressures in the region remain below the European Central Bank’s medium-term target of +2%, set to stay on hold at +1.7% y/y as first reported. Inflation expectations have risen in recent weeks, up to 1.706% on November 9 from 1.686% on October 12. The weaker Euro in recent weeks may be helping lift inflation expectations; on a year-over-year basis, the trade-weighted Euro is down by -1.49%.

Otherwise, the simmering Italian debt saga will continue to be a main draw for market participants. For Italian politicians in Rome, there is a desire to run a budget that fulfills key campaign promises, which will lead to increased deficit spending in the near-term. For European policymakers in Brussels, the concern is that large deficits will raise the odds of a larger-scale Greece-style crisis (Italy’s debt-to-GDP ratio is 130%) for the Eurozone’s third-largest economy. A compromise isn’t out of the question, but is looking markedly less likely than where things stood at the end of September.

Finally, looking at positioning, according to the CFTC’s COT for the week ended November 6, speculators increased their net-short Euro positions to 46.8K contracts, an increase from the 32.6K net-short contracts held in the week prior. Positioning is starting to become interesting once again, but is still remains on the historically light side and thus the risk of capitulation remains low.