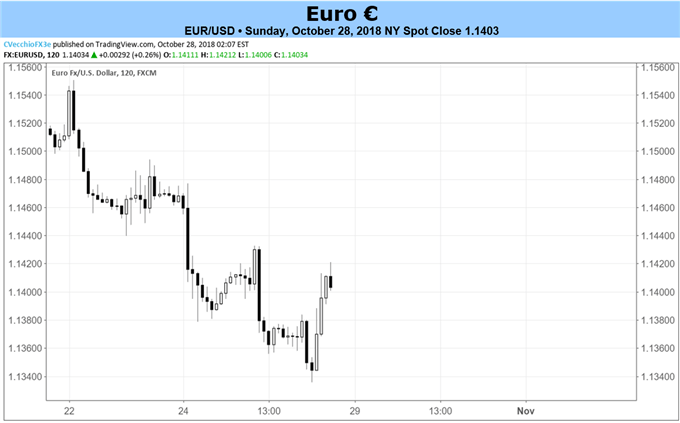 - The Euro fell sharply across the board after ECB President Draghi’s press conference on Thursday, as it was revealed that while the QE program will end in December, that doesn’t mean other programs couldn’t be started up (i.e. TLTROs).

- Amid volatility in global bond and equity markets, the safe haven crosses (EUR/CHF, EUR/JPY, and EUR/USD) were three of the four biggest losers last week.

The Euro was the third worst performing major currency last week, losing ground against all but for the British Pound (EUR/GBP +0.44%) and the New Zealand Dollar (EUR/NZD +0.94%). Amid volatility in global bond and equity markets, the safe haven crosses (EUR/CHF -1.55%, EUR/JPY -0.87%, and EUR/USD -0.97%) were three of the four biggest losers last week. But issues outside of the Eurozone aside, the European Central Bank gave traders reasons anew to sell the Euro.

The Euro took a dive during ECB President Draghi's press conference after it was confirmed that the ECB will end its QE program in December 2018 and it was also revealed that the ECB could consider other tools as it has in the past (i.e. TLTROs) if it were required to support Italy. Even if President Draghi continues to speak confidently about the inflation outlook, the fact of the matter is that if the ECB is willing to do another monetary support program, then its first rate hike is probably further away than “summer 2019” as previously indicated.

Speaking of, President Draghi’s sharp tone towards Italy was met with an immediate response by politicians on Thursday and Friday, and non-insignificant indication that tensions will continue to run high in the near-future. Traders will want to keep watching Italian BTP yields as they’ve held the most significant sway over the Euro among other assets classes over the past month. For now, post-ECB, the factors have shifted in a more bearish manner for the Euro in the near-term.

In terms of economic data due out over the course of the coming week, the only release that will matter is the preliminary October Eurozone Consumer Price Index due out on Wednesday. The headline figure is expected at +2.2% from +2.1%, while the core reading is expected at +1.1% from +0.9% (y/y).

As the only ‘high’ rated event on the week, it’s very likely that the topline macro issues (trade wars, Brexit, Italian budget saga) via the newswire for most of the week. But traders may be more interested in the fact that inflation expectations continue to fall, with the 5-year, 5-year inflation swap forwards (President Draghi’s preferred gauge of inflation) down to 1.659% from 1.697% over the past month, mirroring the move lower in Brent Crude from $82.72/brl to $77.62/brl between September 28 and October 26.

Finally, looking at positioning, according to the CFTC’s COT for the week ended October 23, speculators increased their net-short Euro positions to 30.3K contracts, an increase from the 29.3K net-short contracts held in the week prior. It’s worth noting that the reporting period did not cover the ECB meeting on Thursday that produced the significant Euro selloff, so we should look to the forthcoming COT report for evidence of a larger build in net-short Euro contracts. Nevertheless, positioning remains historically light and the risk of capitulation remains low.