Euro Forecast: Calendar has a Downgraded Role in Current Environment 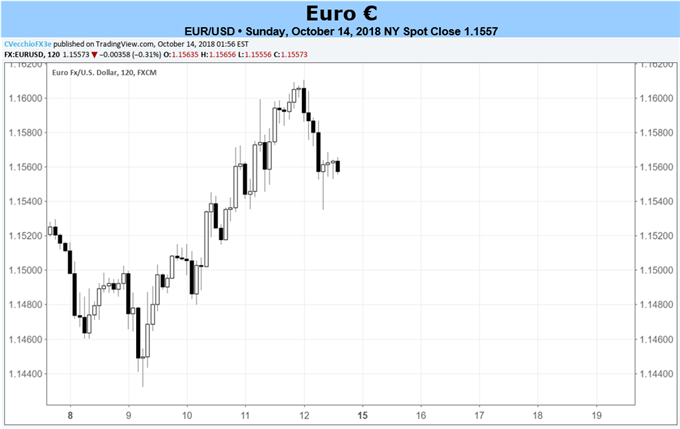 - The Euro weathered the worst of the acute breakdown in risk appetite last week, even as concerns about Italy linger; Italian BTP 10-year yields are at four-year highs.

- The economic calendar remains mostly barren, and the current environment in financial markets means that minor data releases will most likely be overlooked.

- The IG Client Sentiment Index remains ‘bullish’ for the Euro as retail traders continue to buy the US Dollar on dips.

The Euro finished in the middle of the pack last week, gaining ground against four major currencies while slipping back against the other three. Of note, EUR/JPY dropped by -1.03% amid the global equity market rout. Somewhat curiously, despite risk appetite evaporating, EUR/NZD and EUR/AUD were the next two worst performers, down by -0.68% and -0.57%, respectively. Elsewhere, EUR/GBP added +0.06%, turning positive late in the week as Brexit concerns resurfaced, and EUR/USD added +0.31% as the US Dollar was caught up in the “Sell USA” wave.

One thing is for certain about last week: the Euro wasn’t at the center of attention, it was a mere bystander along for the ride. The economic calendar yielded little insightful information, and there were few developments along the Italian budget front (that said, Italian bond yields continue to push higher: the Italian BTP 10-year yield is at a four-year high). Instead, all eyes were on the US Treasury bond market for rising yields and the reaction by equity markets around the world.

The coming week won’t be all that different, as the economic calendar doesn’t offer much by way of significant data that could distract attention from stresses in financial markets across the globe. The most important release of the week, the German and Eurozone ZEW Survey on Tuesday, is very likely to be forgotten about by the next day (if not by lunchtime). In general, economic data hasn’t been strong for the Euro, with the Citi Economic Surprise Index having fallen from -13.6 to -24.8 over the past month.

The final September Eurozone CPI release on Thursday should bring little surprise, as the consensus forecast from Bloomberg News shows no expected change in either the monthly (+0.2%), yearly (+2.0%), or core yearly (+0.9%) readings. Overall, inflation data has been near the ECB’s +2% medium-term target, and medium-term inflation expectations (via the 5-year, 5-year inflation swap forward) have stabilized over the past month, from 1.691% on September 14 to 1.686% on October 12 (still a significant amount away from the yearly high set in January at 1.774%).

Finally, looking at positioning, according to the CFTC’s COT for the week ended October 9, speculators increased their net-short Euro positions to 16.1K contracts, an increase from the 7.1K net-short contracts held in the week prior. Through the rest of October positioning will continue to be a non-factor for the Euro (i.e. the risk of capitulation (covering) due to extreme positioning is extremely low).