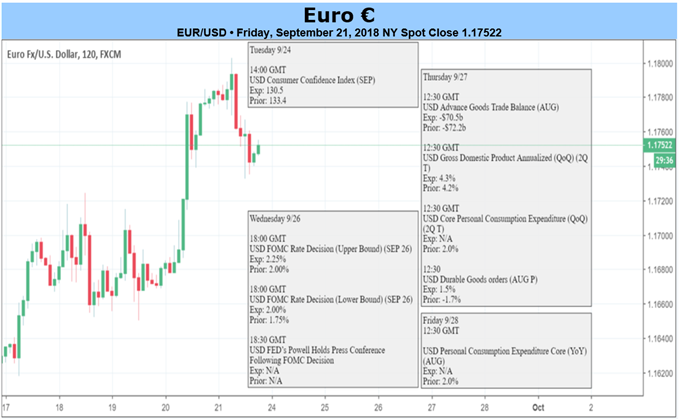 - Euro gains over the past week have largely driven by signs that the Italian government will fall in line with the European Union’s budgetary restraints.

- A surprising amount of negativity at the Brexit Salzburg summit this week knocked the British Pound lower, and dragged the Euro down alongside with it.

- The IG Client Sentiment Indexhas been upgraded to ‘bullish’ for the Euro as retail traders continue to buy the US Dollar on dips.

The Euro was a top three performing major currency last week, only losing ground to the resurgent Australian and New Zealand Dollars, thanks to buoyed risk appetite around the globe. EUR/JPY led the way higher among the EUR-crosses, gaining +1.52%, while EUR/USD added +1.06% and EUR/GBP gained +1.03%. Amid a quiet economic calendar, the major catalyst for Euro gains was news that the Italian government wouldn’t run a budget deficit above 1.6% of its GDP, the threshold that European Commission officials have indicated would be necessary for approval and continued support from supranational institutions.

The key development to look out for with respect to the Italian budget will be what happens with short-term Italian debt. Recently, on August 31, the 2-year yield was as high as 1.465%; following the budget announcement this week, the 2-year yield fell as low as 0.630% (it closed the end of the week at 0.757%). It’s of no coincidence that the Euro rally in September coincided with a reduction of perceived short-term sovereign credit risk around Italy. If concerns around Italy are going to impact the Euro, it will be via another rise in short-term yields.

But if the Italian budget issue is about to fade into the background, the window between tensions is small. The return of ‘hard Brexit’ fears resulting from the surprisingly fractious Salzburg summit obviously hit the British Pound hard at the end of the week, but the spillover impact to the Euro was apparent as well. If odds of a disruptive exit from the EU increase, the uncertainty surrounding the impact to trade could be enough of a reason for the European Central Bank to push back its monetary policy timeline next year.

Elsewhere, the calendar may prove to be more of an influence this week than last. On Friday, the initial September Eurozone Core CPI is due in at +2.1% (y/y), a +0.1% increase relative to the annual pace observed in August. The core reading for Septemberis a slight increase over its Augustreading as well, due in at +1.1% from +1.0%(y/y). The Euro, on a trade-weighted basis, is essentially unchanged over the past year (after being up by over +9% y/y back in April 2018), it stands to reason that inflation has a natural cushion underneath it for the foreseeable future.

Nevertheless, with the ECB’s policy on a preset course – ending QE in December 2018 and raising rates in “summer 2019” – the impact the initial September Eurozone CPI report leaves on markets will be limited unless there is a significant deviation from expectations.

Lastly, looking at positioning, according to the CFTC’s COT for the week ended September 18, speculators remained net-long the Euro to the tune of 1.7K contracts, a drop from the 11.2K net-long contracts held in the week prior. Through September, and now likely for October, positioning is and will be a non-factor for the Euro (i.e. the risk of capitulation (covering) due to extreme positioning is extremely low).