Euro Forecast: After ECB Holds, Italy to Come Back into Focus for Euro 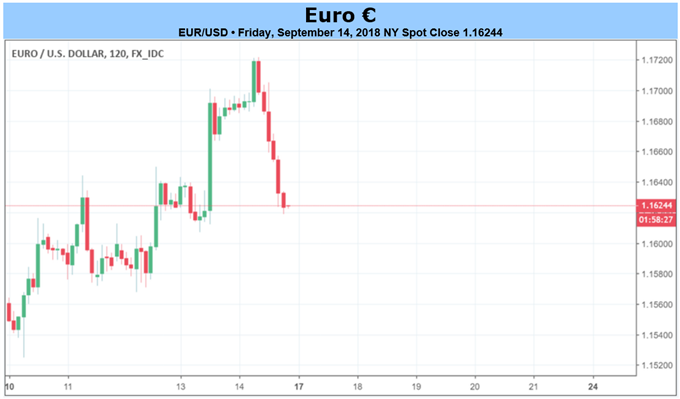 - The European Central Bank continues to aim for ending its QE program in December, then raising rates by the end of “summer 2019”, citing “receding” uncertainty around its inflation outlook.

- Any goodwill provided by the ECB’s confidence in its policy path was quickly erased by Friday as concerns over the Italian government’s upcoming budget resurfaced.

- The IG Client Sentiment Indexhas returned to ‘neutral’ for the Euro after its late-week reversal.

For the third week in a row, the Euro found itself in the middle of the pack, gaining ground against four of the major currencies and losing ground against the other three. But this past week, winners and losers among the EUR-crosses were flipped: the Euro performed well against the safe havens and struggled against the higher yielding and risk-correlated currencies. EUR/GBP led the way lower by -0.52%, while EUR/CHF, EUR/USD, and EUR/JPY gained +0.54%, +0.62%, and +1.57%, respectively.

Price action at the end of the week was revealing in a number of ways. The European Central Bank is sticking to its preset policy course as uncertainty around its inflation forecasts is receding, and that’s certainly good news for the Euro given the swirling concern about potential contagion from the Turkish Lira meltdown.

But with Italy back in the news, any goodwill injected into the Euro from the recent policy decision was quickly neutralized. Mario Nava, the head Italian stock market regulator, abruptly resigned at the end of last week amid mounting pressure from the governing Five Star Movement and Northern League citing an “issue that is only political.”

As a standalone development, the resignation is meaningless; however, in context of a pattern of increasingly harsh anti-EU and anti-Euro rhetoric, market participants pushed up Italian bond yields and reined the Euro back in from its post-ECB meeting highs. Now, attention is on the upcoming Italian government budget and whether or not a showdown with Brussels is a fait accompli – particularly if technocrat Giovanni Tria, the Minister of Economy and Finances, is similarly pressured out of his job.

On Monday, the final August Eurozone Core CPI is due in at +2.0% (y/y), a slight drop from the initial reading reported in at +2.1%. The final core reading for August is set to be confirmed at +1.0% (y/y), down from +1.1% in July. On Thursday, the preliminary August Eurozone PMIs are due, but with all readings due in at or within +/- 0.1 of their final July prints, the impact the data leave should be minimal.

Lastly, on the positioning front, according to the CFTC’s COT for the week ended September 11, speculators flipped remained net-long the Euro to the tune of 11.2K contracts, a slight build up from the 8.0K net-long contracts held in the week prior. Through September, positioning is a non-factor for the Euro (i.e. the risk of capitulation (covering) due to extreme positioning is extremely low).