Euro Forecast: ECB Meeting Eyed, Even if Policy is on Preset Course 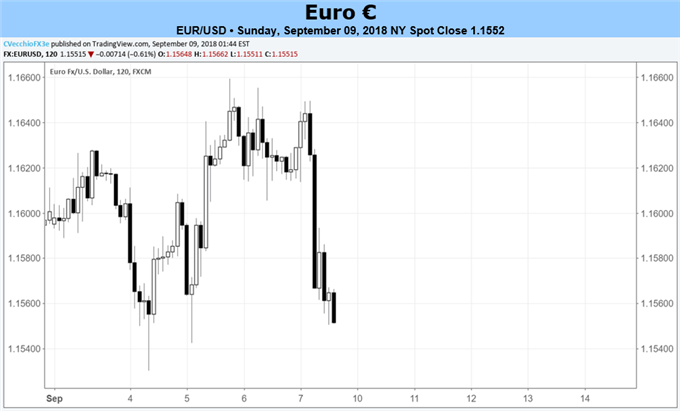 - The Euro finished in the middle of the pack last week, with EUR/JPY, EUR/USD, and EUR/CHF leading to the downside – a sign that risk appetite is deteriorating.

- Thursday’s ECB meeting should bring little new information as policy was preset for the next year back at the June meeting; a mention of European banks’ exposure to Turkish borrowers would excite markets.

- The IG Client Sentiment Index has turned back to ‘bearish’ for the Euro holding at ‘neutral’ for the prior two weeks.

For the second week in a row, the Euro finished in the middle of the pack, losing ground against four of the major currencies while gaining ground against the remaining three. Among the EUR-crosses that lost ground, there is a noticeable pattern: all of the safe havens performed well last week. EUR/JPY led to the downside with a loss of -0.46%, EUR/USD followed lower by -0.42%, and EUR/CHF dropped by -0.39%. Similarly, the Euro gained ground against all of the commodity currencies.

If there is indeed a discernible, negative shift in risk appetite transpiring among developed market currencies, then it’s time to declare that contagion from emerging markets and persistent trade war tensions may have finally started to take their toll.

Coincidentally, given that the emerging market turmoil accelerated upon the release of a report by the Financial Times in early-August that said that the ECB’s supervisory arm was reviewing European banks’ exposure to Turkish borrowers, we’re keenly interested in seeing what ECB President Mario Draghi has to say this Thursday at the ECB’s September policy meeting.

After all, Turkish borrowers owe European banks $194 billion, according to the Bank of International Settlements. A protracted depreciation by the Turkish Lira could very well set off a wave of defaults on these obligations, forcing European banks to write down bad loans. The erosion of excess capital held by European banks could give the ECB pause to its current plans to wind down its QE program by December 2018 and raise rates by “summer 2019.”

Barring a significant discussion over Turkey and the potential contagion, and even though it is a month that will bring forward a new round of Staff Economic Projections, the nature of monetary policy being on a preset course otherwise means that the resulting impact on price action for the Euro should be minimal.

Beyond the ECB meeting, the calendar bears little of interest that will move the needle for the Euro in the coming days. Economic data in general hasn’t been inspiring as evidenced by the stability in readings around neutral in the Eurozone Citi Economic Surprise Index over the past week (from +1.4 to -3.9).

As is customary, positioning warrants a quick mention, if only for record keeping. According to the CFTC’s COT for the week ended September 4, speculators flipped back to net-long the Euro to the tune of 8K contracts, a reversal from the 7.2K net-short contracts held in the week prior. Through September positioning is a non-factor for the Euro (i.e. the risk of capitulation (covering) due to extreme positioning is extremely low).