Euro Forecast: Euro Will Need to Look Beyond the Calendar to Stop its Skid 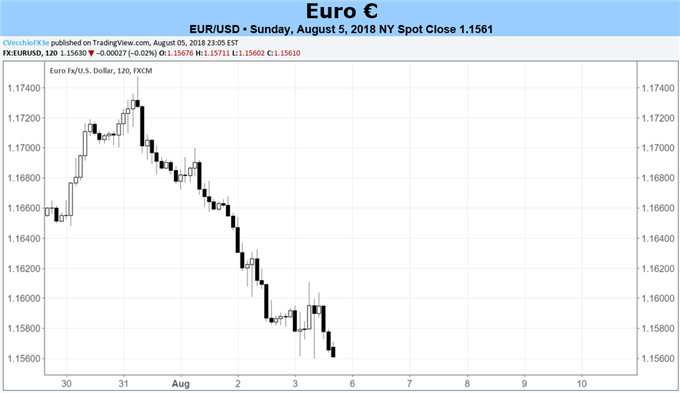 - The Euro’s decline mid-week began after the release of the Q2’18 Eurozone GDP report, which showed growth was slower than anticipated – with traders speculating that the ECB will be slow to tighten monetary policy.

- EUR/USD’s losses were consistent through the end of the week, but for now the 1.1510-1.1853 range since the middle of June remains in place.

- The IG Client Sentiment Index is now issuing a bearish bias for EUR/USD.

The Euro was the second worst performing currency last week, barely edging out the British Pound (EUR/GBP +0.03%). Losses were consistently modest elsewhere, with only one pair declining by more than -1% (EUR/CAD -1.27%). But the catalyst for the declines were endogenous to the Euro, with the Q2’18 Eurozone GDP report coming in weaker than anticipated (+2.1% versus +2.4% annualized), affirming the path of a slow withdrawal of monetary stimulus by the European Central Bank over the next year.

Unfortunately for the Euro, there’s not much for traders to hang their hats on in order to spark a turnaround in the EUR-spectrum. The economic calendar over the coming week features zero ‘high’ rated events, and the most important data release is either the June German Factory Orders report (Monday) or the June German Industrial Production report (Tuesday), neither of which has the cachet to move the needle in a meaningful way for the Euro.

Nor will the central bank speech circuit provide a catalyst: none of the top EB policymakers are due to speak in the coming days. While the July ECB Economic Bulletin will be released on Thursday, the report has rarely if ever produced a significant reaction in the Euro.

If there is one thing to watch over the coming week, inflation expectations have stabilized, and they should be supported moving forward. The 5-year, 5-year inflation swap forwards closed last week at 1.718%, barely changed from where they were on July 6 at 1.721%.

With the Euro trade-weighted index now in the red over the past year (-0.94%), the exchange rate may prove to actually prove supportive to higher inflation moving forward (it typically takes six to nine months for exchange rates to filter through to inflation, so the impact would start to appear around the start of 2019).

Overall, the Euro is still largely unaffected by positioning. Per the CFTC’s COT report released for the week ended July 31, speculators held +22.8K net-long Euro contracts, an -85% decline from the all-time high set during the week ended April 17 (+151.5K contracts). Positioning hasn’t been a factor since the middle of June, and there don’t appear to be any significant reasons for positioning to be a factor through the rest of the quarter.