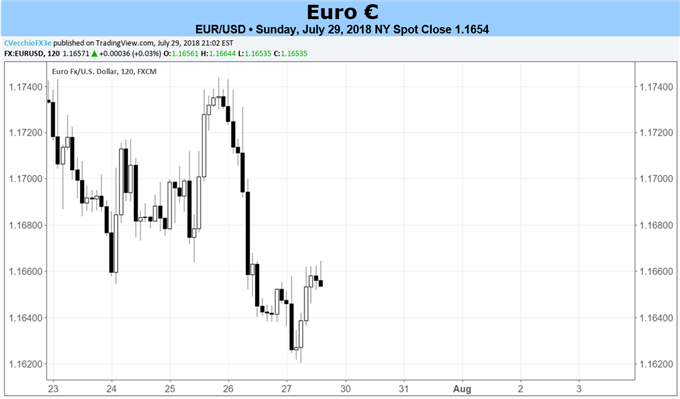 - The Euro slipped at the end of the week after ECB President Draghi made clear that no rate hikes are coming for a year or more.

- Neither the July Eurozone Consumer Price Index or the Q2’18 Eurozone GDP release will materially impact rate expectations, and therefore, the Euro.

- The IG Client Sentiment Index has shifted to a ‘mixed’ outlook from ‘bullish’ earlier last week.

The Euro struggled in the second half of the week, finishing as the third-worst performing major currency. Knocked lower by the European Central Bank and President Mario Draghi’s press conference on Wednesday, EUR/CAD led the way lower by -1.22%, while EUR/USD dropped by -0.57%. But with EUR/CHF and EUR/GBP pushing higher, it’s too soon to say that a broad bearish bias for the Euro is appropriate.

Even though the ECB’s policy meeting this week resulted in a weaker Euro over the course of President Draghi’s press conference, there was no significant shift in current policy or future expectations, so we shouldn’t necessarily be anticipating Thursday’s meeting to be ground zero for a bearish trend to start anew.

As was anticipated ahead of the meeting, the ECB’s July policy statement – and Draghi’s press conference – were near carbon copies of June’s iteration, insofar as the ECB did not move on rates, change its expected timeline for ending its QE program (December 2018), or change its expected timeline for its first rate hike (summer 2019). Against this backdrop, the Euro may be entering a period where, due to monetary policy being on a preset course, it is not the dominant currency in any pairing (i.e. EUR/CAD, EUR/GBP, or EUR/USD, etc.) for the foreseeable future.

Indeed, this very well mean that the coming week’s worth of data does little to spark a directional move for the EUR/USD, which had been decidedly rangebound for the past two months. The July Eurozone CPI report is due to show no change in price pressures from the prior month at +2.0% y/y. Similarly, inflation expectations have been incredibly stable over the past month, having gone from 1.722% on June 29 to 1.724% on July 27.

Any positivity that may be gleaned from another Eurozone inflation report show price pressures at the ECB’s medium-target are likely to be offset by what’s supposed to be a disappointing Q2’18 Eurozone GDP report. While quarterly growth is due in at +0.4% as was the case in Q1’18, the annualized growth figure is set to decline to +2.2% from +2.5%. This shouldn’t be a surprise given the pullback in PMI readings the past few months, but it’s enough of a slowdown to prevent the ECB from acting on any desire to accelerate its timeline for policy tightening as inflation resides near its medium-term target.

Concurrently, with the Euro seemingly destined to trade sideways, positioning is a non-factor. Per the CFTC’s COT report released for the week ended July 24, speculators held +29.6K net-long Euro contracts, an -80% decline from the all-time high set during the week ended April 17 (+151.5K contracts). Positioning hasn’t been a factor for several weeks, and there don’t appear to be any significant reasons for it to become so again in Q3’18.