Euro Forecast: Euro Unlikely to Find a Lifeline in ECB This Week 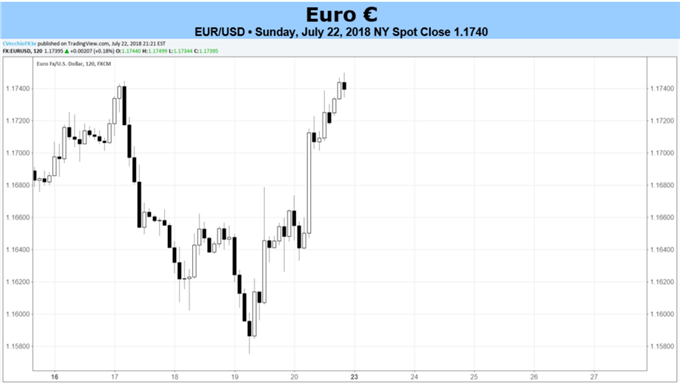 - The Euro is unlikely to get help from Mario Draghi and the ECB this week as policy is on a (mostly) preset course until at least June 2019.

The Euro finished in the middle of the pack last week, gaining ground against four currencies while losing ground against three. EUR/CHF was the worst performer, dropping by -0.61%, while EUR/GBP was the best, adding +0.98%; EUR/USD was volatile but mostly directionless, adding a mere +0.33%. While the economic calendar last week was the main culprit for the lack of significant movement – there were no high rated events on the docket – the coming week features a multitude of event risk.

Starting on Tuesday, the preliminary July PMI readings for Germany and the broader Eurozone should provide a spark for price action. Typically these data releases generate a good deal of interest, although it is worth noting that the lack of meaningful change between the final June PMIs and the preliminary July PMIs may dampen the prospect for a significant move in EUR-crosses. On Wednesday, the German IFO survey for July release draws attention, although once again the lack of significant change expected in the readings limits the potential impact on markets.

The big ticket item for the week is naturally the European Central Bank meeting, although traders may want to start lowering expectations here as well. The primary reason to expect little to result from this meeting is the fact that the July meeting is one without new Staff Economic Projections; like the Federal Reserve (with its Summary of Economic Projections) or the Bank of England (with its Quarterly Inflation Report), the ECB has a multi-year track record of only making significant policy shifts at meetings when it has new economic forecasts in hand.

Moreover, and less of a generalization about ECB policymaking habits, at the previous meeting in June, the Governing Council effectively preset policy on a course through next June when President Draghi announced the schedule for winding down QE through the end of 2018 and pledged to wait on rate normalization until “summer 2019.”

A rundown of key market-based economic activity trackers provides additional evidence to expect the coming ECB meeting to be of the quieter, less impactful variety. The Citi Economic Surprise Index for the Eurozone, which was at a near-seven year when it was -100.1 on June 8, is now at to -36.8 by the end of last week. The 5-year, 5-year inflation swap forwards – Draghi’s preferred market-measure of inflation – have come down over the past month, from 1.736% on June 22 to 1.707% on July 20.

Finally, positioning is still a non-factor in mid-July. Per the CFTC’s COT report released for the week ended July 17, speculators held +21.4K net-long Euro contracts, an -86% decline from the all-time high set during the week ended April 17 (+151.5K contracts). Anyone looking for a large move around the ECB this week, predicated a large capitulation in positioning, seems sure to walk away disappointed.