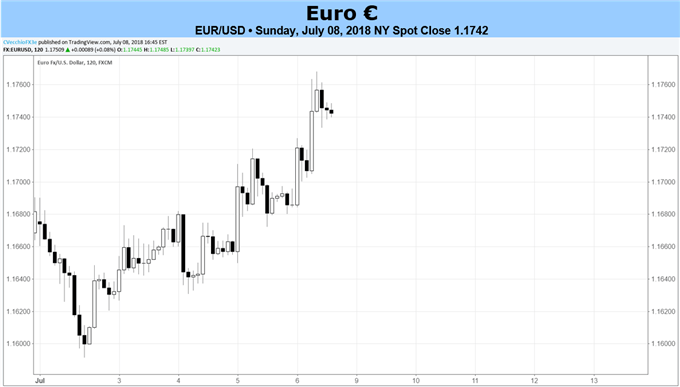 - The Euro has continued with its bottoming process started two weeks ago, gaining ground against all but two currencies last week.

- Economic data has started to improve more broadly alongside inflation expectations, and now traders will look to ECB President Mario Draghi’s two speeches this week for clues on monetary policy.

The Euro was a top three performing currency last week, gaining ground against all but two of the majors. EUR/USD was the performing EUR-cross, gaining +0.53% during the holiday shortened week as the US Dollar was hampered by the official commencement of the US-China trade war. And while market participation has been low thanks to the World Cup, the upcoming slate of Eurozone economic data and events should draw more interest than what’s been seen thus far in July.

Economic data has started to improve more broadly alongside inflation expectations, and now traders will look to ECB President Mario Draghi’s two speeches this week for clues on monetary policy. The Citi Economic Surprise Index for the Eurozone, which was at a near-seven year when it was -100.1 on June 8, rebounded to -36.1 by the end of last week. The final June Eurozone Consumer Price Index due in on Thursday at +2.1% y/y will underscore the extent to which data has stabilized.

Accordingly, now that data momentum is back on the upswing with inflation running higher, it seems likely that ECB President Mario Draghi will be able to refrain from issuing a severely dovish tone during either of his policy speeches this week (Monday and Wednesday). At the June ECB rate decision, Draghi said that it was possible that a rate hike came as soon as “summer 2019,” and it’s possible he offers more color to that point. Rates markets are currently pricing in September 2019 for when the ECB will first move on rates.

Otherwise, the economic calendar contains few other significant opportunities for traders to be left with a lasting impression for price action. The July Eurozone and German ZEW Surveys on Tuesday will generate limited interest, as will the comments made by ECB policymakers Lautenschlaeger, Praet, and Mersch between Tuesday and Wednesday.

Beyond the data, traders will be paying particular attention to developments in the United States multi-front trade war. Now that a front had opened up with China, traders will be quick to react to any signs that Europe will be sucked in deeper as well. But the simple reality of the US being at the center of a disruption to the global trading system leaves the US Dollar at a disadvantage, giving another reason for EUR/USD to stabilize further in the near-term.