Euro May be Pressured with ECB Meeting in Focus 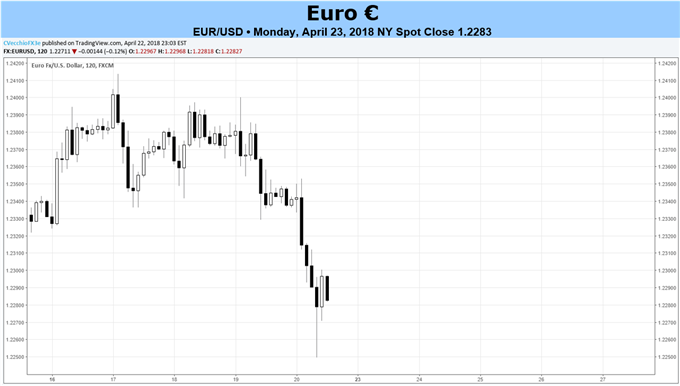 - The Euro trade-weighted index remains up by over +9% year-over-year, a point of interest for the ECB when it meets this week.

- The week ahead sees a lighter Eurozone economic calendar aside from the ECB meeting, meaning the news wire will remain the focal point for price action.

- The IG Client Sentiment Index now has a neutral view on EUR/USD.

The Euro slipped back at the end of last week versus the Japanese Yen and the US Dollar as risk assets turned over, boosting demand for the safe haven currencies. Higher yielding currencies and risk-correlated assets suffered, with pairs like EUR/AUD, EUR/NZD, and EUR/CAD closing the week near their highs. But after another quiet economic calendar that left the Euro at the whims of the other major currencies, the forthcoming ECB meeting should put the Euro back in the driver’s seat.

Even though the European Central Bank policy decision on Thursday will not bring forward a new set of Staff Economic Projections, odds remain high that ECB President Mario Draghi will use his platform to outline a more dovish tone moving forward. There are a few reasons why.

The Citi Economic Surprise Index is hovering near its lowest levels since mid-2011, when the Eurozone was in the throes of the sovereign debt crisis. Recent PMI readings have been disappointing as well: the Services PMI hit 54.9 in March, down from 58 in January; and the Manufacturing PMI fell to 56.5 in March, down from 60.6 in December. Alongside the decline in PMI readings, inflation expectations via the 5-year, 5-year inflation swap forwards have fallen more than 6-bps since their highs in January.

Part of the reason for disappointment in some of the data and inflation expectations in recent weeks can be attributed directly to the Euro itself: it remains up by more than +9% year-over-year on a trade-weighted basis. The stronger the Euro is relative to its peers, the less appealing Eurozone exports appear, plain and simple.

A small shift in language by the ECB could undermine the Euro as market participants remain net-long. According to the CFTC’s COT report for the week ended April 17, there were +151.5K net-long contracts held by speculators, up from +147.5K the week prior; net-longs are now at a new all-time high. At this juncture, it will be much easier for the ECB to do something that pushes the Euro down than it will be for the Euro to stay elevated.