Euro at the Behest of Trade Tensions, FOMC and BOE Meetings this Week 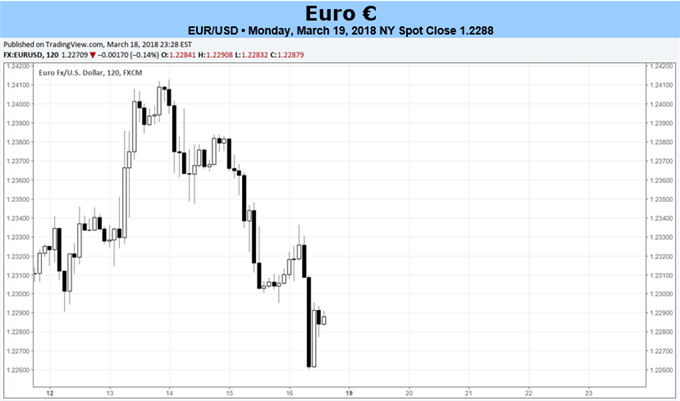 - The Euro’s early-week gains were undercut by a rocky second-half last week, although it still gained against all of the commodity currencies.

- A continued underperformance of data relative to expectations alongside eroding inflation expectations may soon bite the Euro.

A week after the European Central Bank met, traders have still yet to make up their mind about the Euro. The single currency for 19 countries in the Eurozone lost ground against the Japanese Yen, British Pound, and US Dollar once more, but edged higher against the commodity bloc – the Australian, Canadian, and New Zealand Dollars.

Yet very much like last week, whereby the Euro was not in control of its own destiny due to the absent economic calendar, the week ahead seems to be a repeat of sorts, where the influences from other currencies prove overwhelmingly more important than anything emanating out of the Eurozone itself.

While the Eurozone economic calendar has significantly more events on it during this week relative to last, none measure up to how significant rising trade tensions with the United States are proving, nor will any data releases come close to the impact that the March Federal Reserve (Wednesday) and Bank of England (Thursday) meetings will be.

Examining general data momentum, the Citi Economic Surprise Index for the Eurozone finished last week at –31.7, down from -21.6 on March 9. This is a dramatic reversal of fortunes from just a month ago, when the index read +35.7; and now the gauge is at its lowest reading since April 2016.

As has been the case the past few weeks, futures positioning suggests downside still might be easier to come by than upside given the disappointing economic backdrop: net-longs held by speculators increased to +146.4K contracts through the week of March 13, up from +133K in the week prior.

Mutually exclusive from the FOMC and BOE meetings, fundamental indicators that we monitor paint a discouraging picture for the Euro. Taking a look at inflation expectations, the 5-year, 5-year inflation swap forwards, ECB President Draghi’s preferred gauge of price pressures, finished last week at 1.685%; a month ago, they were at 1.750%. Needless to say, inflation expectations are moving in the wrong direction, which serves to undercut the Euro in the near-term.