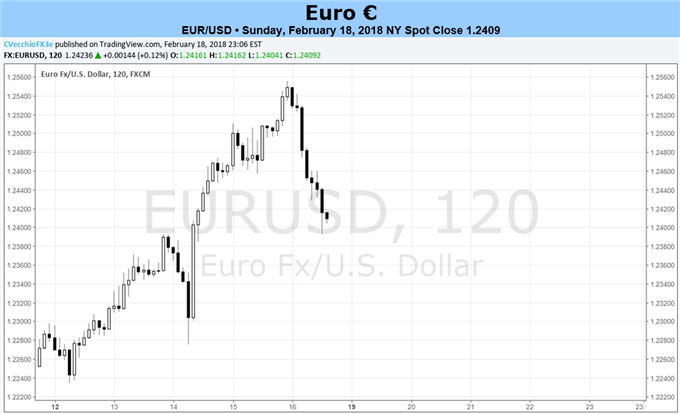 - Preliminary February PMI figures are due from across the Euro-area in the coming days and should frame the conversation about the Euro’s fundamentals for the next few weeks.

- Given the still-outsized net-long Euro position in the futures market, traders may want to treat the bearish daily key reversal in EUR/USD on Friday with caution.

- The IG Client Sentiment Index has started to cool on EUR/USD in the near-term, although the retail crowd remains net-short.

The Euro finished in the middle of the pack last week, adding another +1.24% versus the US Dollar, even as EUR/USD marked a bearish daily key reversal on Friday. Elsewhere, with volatility remaining elevated across asset classes, EUR/JPY was the worst performer, dropping by -1.17%. Overall, the Euro hasn’t moved much over the past few weeks, with the Euro trade-weighted index finishing Friday at 127.74, barely lower than where it was at the end of January (127.83).

In the coming week, attention will initially be on the preliminary February Euro-Zone PMI readings on Wednesday, and the figures should help shape the market’s perception of the region’s growth prospects. Consensus forecasts, according to Bloomberg News, see the first reading for the Manufacturing PMI to come in at 59.2 from 59.6, an immaterial drop from all-time highs.

Likewise, the Composite PMI for the Euro-Zone is due in at 58.4 from 58.8, another insignificant drop even as the headline drops from its highest level since February 2011. There will need to be a considerably large drop in the PMIs for traders to reconsider their optimism over the Euro’s prospects.

On Thursday, the minutes from the European Central Bank’s January meeting are due. However, unlike the January release, which covered the December meeting which had a new set of Staff Economic Projections revealed, the coming minutes will have much less ‘hard’ information to discuss. Barring an explicit discussion condemning the trade-weighted Euro’s appreciation in recent months, there is limited prospect for the minutes to leave a mark.

Elsewhere, market measures of inflation continue to hold up, with the 5-year, 5-year inflation swap forwards, one of ECB President Draghi’s preferred gauges of inflation, closing on Friday at 1.750%, the same as the week prior. The Euro itself may be an impediment to higher inflation expectations, given that the trade-weighted index is up by +9.24% y/y.

Moving forward, traders will need to remain cautious about the overextended state of the futures market, where speculators are still holding a significantly large net-long Euro position. For the week ended February 13, speculators held +127.3K net-long contracts; not an insignificant drop from the all-time high in net-longs set during the week ending on January 30 at +148.7K contracts.

Even in the face of a -14.4% drop in net-longs over the past two weeks, EUR/USD was still able to push to new highs going back to December 2014. Needless to say, it will take a great deal of negativity – a change in tone by the ECB, a substantial turn in economic data – for traders to give up on their Euro bullishness.