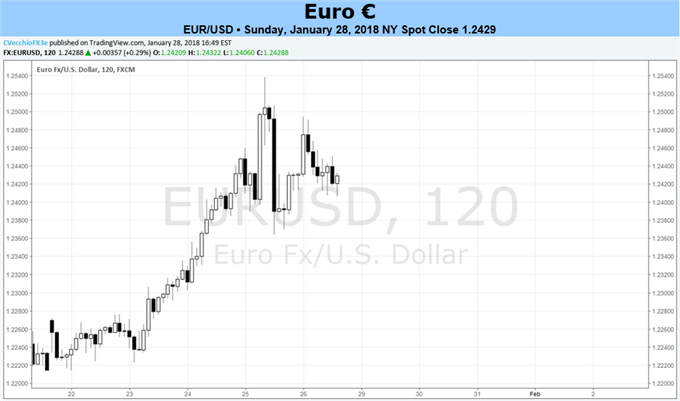 - The ECB stayed away from a strong condemnation of the recent Euro appreciation, clearing the way for more gains as traders bet on a more robust Euro-Zone recovery.

- Upcoming Q4’17 Euro-Zone GDP data and the preliminary January CPI report are the next obstacles for the Euro.

- The IG Client Sentiment Index is no longer bullish on EUR/USD in the near-term.

The Euro’s gains versus the US Dollar extended into a fourth consecutive week to start 2018, with the European Central Bank’s President Mario Draghi failing to slow down speculation over the end of the central bank’s easing program. EUR/USD added another +1.65%, trading above 1.2500 briefly on Thursday. But Euro gains were not fully widespread; EUR/GBP dropped by -0.49% and EUR/GBP lost -1.56%.

On both ends of the performance spectrum last week, EUR/USD and EUR/GBP revealed an important aspect of the current market: growing US political risk has been weighing on the US Dollar, even offsetting a steady rise in Fed March rate hike odds (the FOMC meeting this week is insignificant); and UK economic data has been unexpectedly strong, complementing what has been a steady diet of positive news about the direction of Brexit. Thus, to an extent, the Euro’s appreciation is incidental rather than intentional.

It would appear that with energy prices continuing to run higher – Crude Oil closed at 70.52 on Friday, its highest level since December 3, 2014 – traders are betting that the Euro appreciation won’t get in the way of a rise in inflation back to the ECB’s medium-term target of +2%.

Market measures of inflation are stable with the 5-year, 5-year inflation swap forwards closing last week at 1.729%, down from 1.765% a week earlier, but still higher than the 1.720% reading a month ago. For now, the Euro hasn’t interfered with the broad uptick in inflation expectations, and so long as energy prices continue to sustain their strength, market participants don’t appear to be committed to saying the Euro’s rise is that much of an issue.

Certainly, traders have taken notice of the Euro’s appreciation and have piled back into long positions. Per the CTFC’s COT report released on Friday, speculative traders are holding 144.7K net-long contacts, the highest level ever. There has been a very sharp build up in positioning the past month, with net-longs now 57% higher than they were during the week of December 26, 2017.

If the ECB’s Draghi proved feckless in his attempt to caution the market on Euro appreciation, it will truly take a sharp turn in economic data and inflation expectations before traders abandon the Euro long trade. In general, economic data has been strong, as the Euro-Zone Citi Economic Surprise Index finished Friday at +56.4, slightly higher than the +58.3 reading the week prior and +49.3 a month earlier.

Over the next few days, there are two instances in which the Euro will be in charge of its own destiny (overcoming whatever pull the British Pound and the US Dollar have otherwise). On Tuesday, the initial Q4’17 Euro-Zone GDP report will show that the economy grew by +0.6% q/q and +2.7% y/y (a slight improvement over the +2.6% y/y reading seen in the quarter prior). On Wednesday, the preliminary January Euro-Zone Consumer Price Index is set to show a rise in the core reading to +1.0% from +0.9% (y/y) but a decline in the headline from +1.4% to +1.3% (y/y).

With the data set to come in decidedly mixed this week, it doesn’t appear that the turn in the data will be coming that could derail the Euro’s current upward trajectory; the year-long rally in the Euro trade-weighted exchange rate (+9.2% over the past 52-weeks) should continue to grind forward. A tough week for the Euro should see EUR/CHF and EUR/GBP underperform, while any Euro strength should still be best expressed by EUR/USD.