The Big Question This Week: Is the Euro Too Strong? 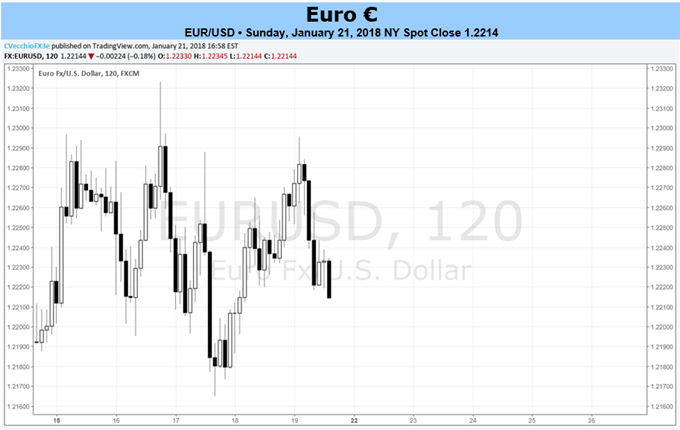 - The ECB meeting this week won’t produce any substantive change in policy, although the press conference could bring dovish commentary from President Mario Draghi.

- Euro strength has become a concern for policymakers in recent weeks, and its nearly 5% above the ECB’s 2017 year-end expectation of 1.1700.

- The IG Client Sentiment Index is mixed on EUR/USD in the near-term.

The Euro’s hot streak versus the US Dollar finally started to cool off last week, with the pair slipping back by -0.16% despite the US government being on the precipice of a shutdown. But gains were still widespread elsewhere, with five of the seven major EUR-crosses turning in positive performances over the past five days: EUR/AUD added +0.82% and EUR/GBP gained +0.78%.

After a week in which the December European Central Bank policy meeting minutes signaled some intent to wind down the QE program sooner than previously anticipated, ECB policymakers came out to remind market participants that they’re not going to let Euro appreciation run unchecked. ECB Vice President Vitor Constancio and Governors Francois Villeroy de Galhau and Ewald Nowotny all suggested that sustained strength in the Euro exchange rate could become an obstacle in the fight to get inflation back to the medium-term target. This seems to lead to the key question heading into the ECB rate decision this week: will the Euro’s otherwise unchecked strength in 2018 provoke a change in tone from President Mario Draghi?

It certainly seems possible. The ECB’s expected exchange rate for 2018 for EUR/USD comes in at 1.1700, meaning Friday’s close at 1.2214 was closing in on a +5% move (1.2285) above the year-end target, a threshold the ECB has previously bristled at once broached (edit: as of the morning of the ECB rate decision, EUR/USD was +6% above its year-end target). But considering that the coming policy meeting is one without a new set of Staff Economic Projections (SEP) – those are due next in March – there’s unlikely to be a formal shift in ECB policy on Thursday.

Instead, ECB President Mario Draghi will likely caution market participants about how further Euro strength could get in the way of achieving the medium-term inflation target. The evidence he can point to is fresh in recent memory, with the final December Euro-Zone CPI report showing headline inflation at +1.4% y/y; it isn’t a stretch to suggest another sharp move higher in the Euro trade-weighted exchange rate could prove disinflationary.

Market measures of inflation continue to trend higher, and with the 5-year, 5-year inflation swap forwards, one of ECB President Draghi’s preferred gauges of inflation, closing last week at 1.765% - its highest level since February 21, 2017. For now, the Euro hasn’t interfered with the broad uptick in inflation expectations, and so long as energy prices continue to sustain their strength, market participants don’t appear to be committed to saying the Euro’s rise is that much of an issue.

In general, economic data has been strong, with the Euro-Zone Citi Economic Surprise Index finished Friday at +54.6, stable relative to the +58.3 reading the week prior and +56.5 a month earlier. As noted in the past two weeks of this report, the decay over the past month appears to be a function of data rolling off the calendar and a lack of new releases at the end of December to replace them; now that data are being released again, the gauge has firmed back up).

Likewise, recall that the final Euro-Zone Composite PMI reading for December showed that growth momentum in the Euro-area is at its strongest pace since January 2011, while the Euro-Zone Manufacturing PMI hit its all-time high to finish 2017. If Euro strength is truly a problem, the preliminary January PMI reports due in the first week of February will begin to reflect it.

To this end, we expect the Euro to face a minor setback as a result of the ECB rate decision this week, but not significantly and for not that long.

This note was originally published on January 21, 2018.