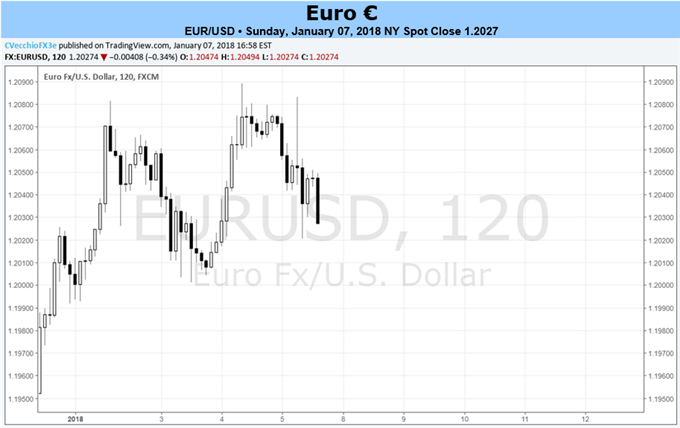 - Further Euro gains will have to contend with an already supersaturated futures market, where net-long positions held by speculators hit an all-time high coming into 2018.

- The ECB won’t be raising rates this year, and with its normalization process on autopilot, the Euro is without the central bank as a significant driver in the near-term.

The Euro finished in the middle of the major currencies covered by DailyFX Research last week, shedding the most to the Canadian Dollar (EUR/CAD -1.08%), and rallying the most versus the Japanese Yen (EUR/JPY +0.52%). With the new MiFID II regulations coming into force, it would appear that European financial institutions are withholding the same volume of trading activity that normally comes with the start of a new year. Time will tell if lower volumes persist and if there are further knock-on effects to volatility.

Much like last week, when the economic calendar was not much of an influence on the Euro, the coming week is lacking both the quantity and quality of events to drive significant price action in the Euro. On Monday, November Euro-Zone Retail Sales are due and are expected to confirm improving consumption trends through Q4’17, suggesting a strong GDP reading could be coming down the pipeline at the end of January. On Tuesday, the November Euro-Zone Unemployment Rate is due to show the labor market will reach its strongest level since January 2009. Beyond these two reports, the account of the European Central Bank’s December policy meeting on Thursday offers the best opportunity for event-driven price action.

Barring a sea change in economic data momentum, something unlikely to transpire this week given the economic calendar, it would appear that the Euro’s current trajectory has little reason to be knocked off course. After all, given that they are following the Fed’s playbook, the ECB won’t be raising rates so long as they are continuing their QE program – which continue fully through at least the end of this year. The ripple effects are small, but important: if ECB policy is deemed to be on a set course for the next several months, it may mean price action around typically important releases like the CPI or PMI reports is dampened going forward.

Heading into the first full trading week of 2018, the Euro continues to have strong fundamentals supporting it. Economic data momentum has weakened but remains solid, with the Euro-Zone Citi Economic Surprise Index finishing Friday at +46.0, down from +49.3 the week prior, and lower than +60.1 a month ago (the decay appears to be a function of data rolling off the calendar and a lack of new releases over the past two weeks to replace them).

The final Euro-Zone Composite PMI reading for December showed that growth momentum in the Euro-area is at its strongest pace since January 2011, while the Euro-Zone Manufacturing PMI hit its all-time high to finish 2017.

Turning to market-derived indicators of price pressures, the 5-year, 5-year inflation swap forwards, one of ECB President Draghi’s preferred gauges of inflation, closed last week at 1.710%, barely lower than the 1.720% reading a week earlier, but still higher than the 1.708% reading a month ago. Given that Euro strength has sustained itself over the past few months, evidence that inflation expectations continue to trend higher should keep the ECB feeling confident about its current trajectory of normalizing policy.

According to the CFTC’s latest COT report, there were 127.9K net-long contracts held by speculators for the week ended January 2, thehighest level ever. While this isn’t enough information alone to act on a contrarian short Euro position, it does caution that the year-long uptrend – EUR/USD bottomed for 2017 on the first trading day of 2017 – is long in the tooth and should be approached with caution. So long as the Euro has strong fundamentals behind it, traders may continue to find excuses to look long the single currency as the new year gets under way.