Sideways Trading Through End of 2017 Looks Likely for Euro 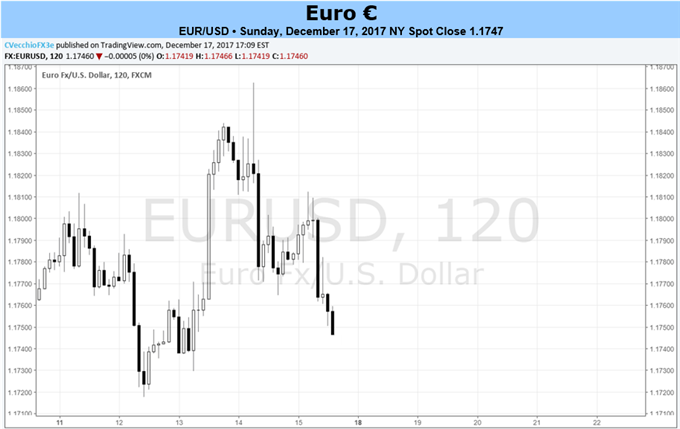 - Futures positioning remains a major impediment for the Euro, with net-long positioning at a fresh 2017 high and its highest level since May 2007.

- The ECB won’t be raising rates in 2018 but will continue with its normalization process, likely leaving the Euro without the central bank as a significant driver in the near-term.

The Euro finished near the bottom of the major currencies covered by DailyFX Research last week, dropping the most against the antipodean sisters (EUR/NZD -2.34%; EUR/AUD -2.03%), with no other losses in excess of -1%. EUR/USD was barely lower by -0.20% (but finished Friday particularly poorly) and EUR/GBP was a touch higher, by +0.32%.

At its December policy meeting, the European Central Bank offered a similar assessment of its rate expectations and forward guidance as it did at the October iteration. Concurrently, it’s near-term GDP and inflation forecasts (2018 and 2019) were upgraded, but the 2020 inflation forecast was not, highlighting the ‘cautious optimism’ policy officials are viewing the recovery.

While this means traders may be disappointed that no rate hikes are coming next year, it does mean that normalization is well under way, which should keep the Euro supported for the foreseeable future. Unfortunately, this leaves the Euro without the European Central Bank as a significant driver heading into 2018. The ripple effects are small, but important: if ECB policy is deemed to be on a set course for the next several months, it may mean price action around typically important releases like the CPI or PMI reports is dampened going forward.

In the week ahead, the Euro sees a quieter economic calendar than last week, no surprise in the run-up to the Christmas holiday. The final Euro-Zone CPI report for November shouldn’t leave much in its wake on Monday. Otherwise, the German IFO report should have minimal impact on price action on Tuesday, as will the final Q3’17 French GDP report on Friday. Likewise, during the week between Christmas and New Year’s, we shouldn’t look to the calendar as a significant source of event risk.

Heading into the final two weeks of 2017, the Euro has firm fundamentals supporting it. Economic data momentum is solid and remains near multi-year highs, with the Euro-Zone Citi Economic Surprise Index finishing Friday at +70.3, up from +60.1 the week prior and still higher than +58.9 a month ago. The final PMI readings for November released thus far have showed that growth momentum in the Euro-area is at its strongest pace since 2011.

Taking a look at market-derived indicators of price pressures, the 5-year, 5-year inflation swap forwards, one of ECB President Draghi’s preferred gauges of inflation, closed last week at 1.705%, a touch lower than the 1.708% reading a week earlier, but still higher than the 1.670% reading a month ago. Given that Euro strength has sustained itself over the past few months, evidence that inflation expectations continue to trend higher should put to rest any near-term concerns that the ECB might have over tapering the pace of its asset purchases as the calendar turns into 2018.

We still believe that the biggest obstacle to further Euro strength lies not with the ECB or upcoming economic data, or even politics heading into the final two weeks of the year; but rather where market positioning stands. The Euro long trade in the futures market remains crowded among speculators/non-commercial traders.

According to the CFTC’s latest COT report, there were 113.9K net-long contracts held by speculators for the week ended December 12, thehighest level since the week ended May 15, 2007. After positioning peaked in May 2007, EUR/USD dropped over the next four weeks for a loss of just over -3%.

While this isn’t enough information alone to act on a contrarian short Euro position, it is enough of a reason to curb our enthusiasm about the Euro’s otherwise improved fundamentals, suggesting that choppy, sideways range trading is due through the end of 2017 – and if weakness does transpire, it’s merely a saturated market taking profits on Euro longs.