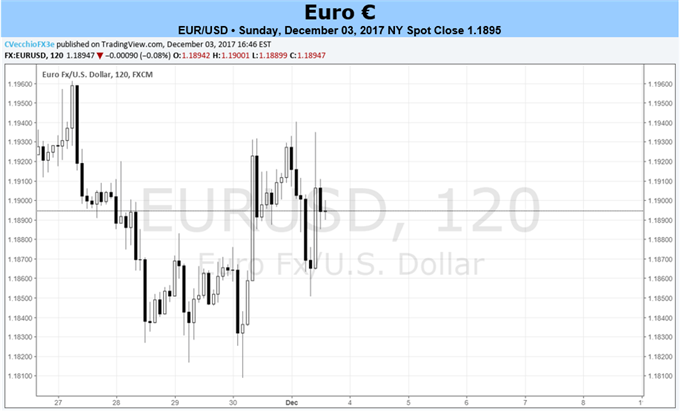 - Futures positioning remains a major impediment for the Euro, with net-long positioning still near its 2017 high and its highest level since May 2011.

- The ECB will release new staff economic projections (SEP) on Thursday, in which there is a strong possibility that more optimistic growth and inflation forecasts are unveiled.

The Euro finished in the middle of the pack last week, no surprise given that the Euro-Zone calendar was dry and thus exogenous influences – progress in both the Brexit negotiations and the US tax reform bill – proved to be the key driver; EUR/USD dropped by -1.04%, while EUR/GBP shed -0.39%.

While these thematic influences will remain in the news wires in the coming days, the Euro brings its own event risk to the coming week that should prove plenty market moving. The calendar is dotted with a few data releases that will generate small amounts of volatility in the coming days (on Monday, Euro-Zone and German ZEW; on Thursday, preliminary December PMIs), but the ringer this week is the European Central Bank meeting on Thursday.

Coming into the meeting, the Euro has firm fundamentals supporting it. Economic data momentum eased further last week, but remains near multi-year highs, with the Euro-Zone Citi Economic Surprise Index finishing Friday at +60.1, down from +70.3 the week prior but still higher than +58.9 a month ago. The final PMI readings for November showed that growth momentum in the region is at its strongest level since 2011.

Elsewhere, the 5-year, 5-year inflation swap forwards, one of ECB President Draghi’s preferred gauges of price pressures, closed last week at 1.708%, higher than the 1.700% reading a week earlier, and still higher than the 1.679% reading a month ago. Given that Euro strength has sustained itself over the past few months, evidence that inflation expectations continue to trend higher should put to rest any near-term concerns that the ECB might have over tapering the pace of its asset purchases as the calendar turns into 2018.

As such, with the December policy meeting being one of the four meetings during the year that new staff economic projections (SEP) are released at, there is a strong possibility that the ECB revises its growth and inflation forecasts for 2018, and given where the aforementioned indicators stand, the risk is for a positive surprise – upside adjustments to both the GDP and CPI projections.

While the ECB seems to be following the Fed’s playbook (taper the QE program, allow some time at low rates without additional stimulus, then raise rates after a small adjustment period), implicitly, any upwards revision to the SEP will bring with it speculation that the ECB may taper their QE program faster than currently outlined, highlighting the potential for a rate hike to transpire sooner than what the market is currently pricing in (the second half of 2019 at the earliest).

It’s important to handicap our expectations of an optimistic ECB translating into a stronger Euro given where market positioning stands, as the Euro long trade in the futures market remains crowded. According to the CFTC’s latest COT report, there were 93.1K net-long contracts held by speculators for the week ended December 5,near thehighest level since the week ended May 3, 2011 (when EUR/USD peaked just below 1.5000).